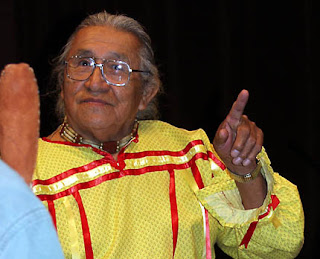 He leaned against the side of the van, caressing a half finished mug of coffee. His shoulder length, steel gray hair was caught into a braid at the back of his neck under a beat-up old straw cowboy hat. A large oval of turquoise hung from his neck in the center of a faded Budweiser T-shirt, just above an ornate silver belt buckle. Well-worn jeans and scarred leather cowboy boots completed his look. His bronze skin reflected the morning light as he stood there - - a stranger in our midst. He had emerged from an antique, white Chevy station wagon trimmed with rusty lace and bearing a bumper sticker that read “Born Again Savage.” Harry Charger.

Our group straggled toward him slowly. We were camped at Green Grass on the Cheyenne River Reservation, a cultural mixture of Anglo- American, Japanese, and Hawaiian individuals seeking lessons in nonviolence from the Lakota People. The sunrise had brought thousands of tear shaped diamonds to the prairie grasses that cushioned our sleep during the night. There was a slight breeze kissing the giant old cottonwood tree that sheltered our makeshift kitchen. Carl, one of our leaders, had been up early, getting a fire started - - preparing the ritual pot of coffee on the open fire - - ready for consumption from the chipped blue enamel mugs that had seen many such mornings. When this essential ritual of hospitality had been completed and all the mugs were steaming, our visitor started to get acquainted and the story telling began. Harry Charger was a consummate story-teller - -everything from homespun tales about his wife and grandkids to stories of life on the reservation to his warrior days in Korea. He stayed about an hour, shifting his weight against the van, dumping out his cold coffee and accepting a hot refill.

Then suddenly he looked at the digital watch on his wrist and said he was late and had to go. He needed some help stringing some electrical wire at the powwow ground - - “Anybody want to help?” Several of us volunteered. The rest of us would mow grass and clean up the horse manure from the powwow circle to make a clean space for the dancers at the upcoming tribal gathering. Harry climbed back into his rattletrap wagon with several of our group and took off down the road in a cloud of South Dakota prairie dust.

Later in the day, the old station wagon appeared again over the crest of the eastern hills. Again, the coffee mugs emerged and we welcomed Harry back into our midst. “You know, I’ve been thinking all day – and I really struggled with this” Harry began without preamble. “Have any of you ever smoked the Pipe?” With one voice we said “No.”

“You guys have been pretty decent to me. I think it would be OK to smoke the Pipe with you. How about if I come back around sunset?”

Harry and sunset arrived at the same time. We sat in a circle around the fire, only the discs of our faces visible as darkness cloaked the prairie. The evening breeze carried the intimate conversations of horses off in the distance. The ceremonial drums of the Peyote Church several miles away set the mood for our own ceremony.

Harry told the story of the Pipe as he fitted its pieces together. It was given to his people by White Buffalo Calf Woman to be shared together as a way to pray, to speak the truth, and to heal broken relationships. Harry prayed to the Four Directions as he filled the pipe and offered it to each direction. Then he began to pass the Pipe, giving gentle instructions as he did, reminding us that white folks probably shouldn’t inhale because the barks and tobacco were a lot stronger than anything we might be used to. We passed the Pipe quietly. Each time the Pipe passed from one pair of hands to the next, it was accompanied by the Lakota prayer: “Mitakuye Oyasin” – “We are all related.”

I didn’t sleep for a long time as I lay awake reflecting on the meaning of what had happened. Harry’s people are in conflict about what should and should not be shared with white folk. Harry had taken a risk. He had shared the utmost act of grace with us. He had offered his tradition’s sacrament to strangers - - to enemies. We were among the people that he and his tribe had the most reason to hate, and he offered us the Pipe, as a means for prayer, for speaking the truth, for healing broken relationships.

The words of Isaiah resound: God will guide you continually, and satisfy your needs in parched places, make your bones strong; and you shall be like a watered garden, like a spring of water, whose waters never fail. You shall raise up the foundations of many generations; you shall be called the repairer of the breach….”

Repairer of the breach. A living lesson in nonviolence.