Not in Facts but in Story

Marilú Ríos Guerrero recently suggested, via email, a video that might be posted to LivingNonviolence. The link she provided our editor was passed to me for consideration. 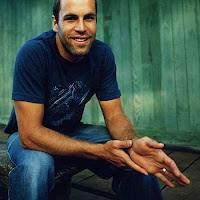 The video Marilú suggested features the song "Anything but the Truth" by Jack Johnson (pictured left). I've now viewed it many times, searching for an angle for this post. Finally the song lyrics have led me to ask, "What is the truth," exactly?"

The answer that comes to mind is this: "I don't know, exactly. But whatever else it might be, truth is story. Not facts, but story."

In the absence of story there is despair. Estrangement. Malice. In the absence of story, the distance between widens and deepens; huge chasms form across which bridges of understanding and reconciliation can no longer be built, but across which indifference and apathy can be maintained, insults and accusations hurled, Molotov cocktails and cruise missiles launched. The void is one that perhaps only story can fill. Story, and the sharing of story, creates connection.

Back in the 1700s, a great Jewish teacher named Israel Baal Shem-Tov lived in Poland. It's said that whenever the good rabbi became aware that tragedy was about to strike the Jewish people (as often happened), he would go to a certain place in the forest, light a fire, and say a very special prayer. And always it would happen that the impending tragedy would somehow be avoided.

When Israel Baal Shem-Tov was no longer walking the earth, his disciple Magid of Mezritch would go into the forest on behalf of his defenseless people. Going to the same place his rabbi had once gone, he would cry to God, "Listen to me! I don't know how to light the fire, but I know the right words to pray. Let this be enough." And always it would happen that the impending tragedy would be avoided.

Then it was the turn of Moshe-Leib of Sasov to save the Jews. He went into the forest and prayed, "O God, listen to me! I don't know how to light the fire, and I don't know the words to pray. But I know this place. Let this be enough." And always it would happen that the impending tragedy would be avoided.

Finally, responsibility for protecting the Jews fell on Israel of Rizhyn. He prayed to God in his house, sitting in his chair with his head in his hands, eyes closed. He said, "Listen to me! I don't know the place in the woods. I'm unable to light the fire. I don't know the words to pray. But I can tell the story. Let this be enough." And it was enough.

The video you're about to watch, courtesy of Marilú Ríos Guerrero, opens with a Cree Indian prophecy:

Let me, as conclusion, offer this response:

(Note: If for some reason you can't see the viewer below, click here to watch the video.)