The World Is Mine ... and Yours 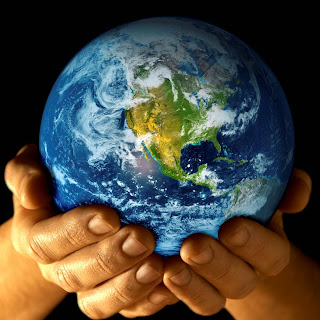 On a recent evening while driving home, I came to a stop
at a light behind a rather large vehicle. My eyes were immediately drawn to the frame around the license plate. It was a digital display in bright red lights that formed the words of a continuously repeating message. Intrigued, I stared and read with a sigh, “the world is mine.” I wondered if the monotonous mantra was circling in the driver’s head, as well, feeding a dangerous sense of entitlement on the road as well as of place in the world.

Indeed, as the king of the road took off, quickly leaving me and others well behind, I thought about the ironic juxtaposition of his rather large sense of self in relation to the week’s Torah portion, Vayikra/Leviticus (ch. 1-5). From the very first word of this first portion in the third book of the Torah, there comes a teaching of smallness, not as in unimportant, but as in the importance of each one and of the greatness found in drawing near to each other. The last letter of the first word, vayikra/and God called, is the Hebrew letter aleph. Unlike anywhere else in the Torah, the aleph is written small. Even as it appears in the Torah scroll itself, this tiny orthographic detail is seen as a reflection of Moses’ humility. Vayikra/and God called suggests an intimacy unknown by others, of God seeking and calling out as one would call to a friend. Embarrassed to appear so special, according to the warm teaching of Midrash, Moses at first refused to write the word Vayikra into the Torah. Told to write, he said in effect, “okay, but I’m gonna make the aleph small.

From that beginning, as in much of the book of Leviticus, the portion is primarily concerned with offerings. As though its own teaching on the finding of beauty in places unexpected, there emerges beyond the details of a system so foreign to us layers of teaching concerning human relationship. From the small aleph as the starting point, words themselves lead us to look beneath the surface and wonder of the ways in our time and place of drawing near to each other. The most common word for “offering” as repeated throughout Leviticus is korban. The root is of the word, karov, which means “near” or “close.” The korban was a means of drawing close to others, and in that way so to God. In addition to supporting the priests, most offerings were to be eaten as part of a meal shared with others. There in the Temple precincts people were to pause and partake together.

More than partaking together, all of the offerings but one may be offered collectively. In a beautiful phrase, the rabbis said, ha’kol ba’in b’shutafut/all may be brought in partnership. The one offering that is to be brought only individually is the grain offering. Only of this offering does the Torah speak of the person who brings it as a nefesh, a soul. As the essence of a person, soul speaks of that which is most unique about each one, that which describes our individual being. Even as we reach out and draw near to each other, becoming as the small aleph to make room for others, there is a reminder that at the same time individual uniqueness is not to be offered up on the collective altar.

In the continuous interplay of individual and collective, of partner and partnership, there is a fine-tuning of relationship, that, in Buber’s equation, each one is to remain an “I” and a “Thou.” As made into loaves, the grain offering is always to be of matzah, unleavened bread, and never of leavened bread. As the poor bread, the humble bread, as matzah is called when raised up at the Passover Seder, Rabbi Sampson Raphael Hirsch says, “matzah symbolizes a state of political dependence…, by contrast leavened bread symbolizes independence and the power to be master over ourselves.” The danger in the puffed up way of leavened bread is that we may also look to be master over others. In the very offering through which our individual uniqueness is emphasized, whose bringing is an expression of personal autonomy, we are reminded that independence is larger than one. Through the grain offering, we learn of interdependence.

As we pause on the road of life, giving others space to safely pass before us, may we remind each other in the manner of our waiting, not with flashing lights, but in the glow of a simple aleph, that the world is mine, and yours, to be shared by all. 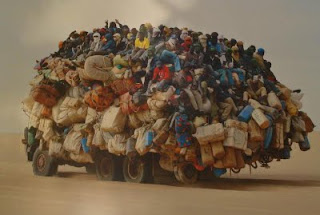