What Does Realism Require? 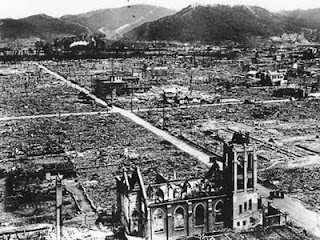 For centuries the Christian tradition in the West was guided in matters of war and peace by the Just War Theory, which was designed to limit the scope of war and turned out to be a useful tool for the justification of war. The Just War Theory proposed a number of conditions such as proportional response and the protection of civilians that were to be used to guide decisions about when to go to war and the conduct of war. World War II blew the Just War Theory apart and cast it into the dust bin of history. Fire bombing cities and dropping the atomic bomb first on the citizens of the Marshall Islands and later on the people of Japan negated the provision to protect civilians and made the idea of proportional response antiquated.

After World War II, policy makers and Christian ethicists and theologians in the United States adopted a new framework for militarism. Just War Theory was replaced by the secular doctrine of Mutually Assured Destruction (MAD) and in Christian circles by a theory of Christian Realism. Both MAD and Christian Realism relied on the concept of a balance of power. Theorists spoke of a world of chance, happenstance, and caprice and said that the best approximation of justice and peace could be found through a balance of competing powers. This line of reasoning guided policy planers during the Cold War era. The political-military-industrial elite proffered the hope that new weapons and ever more sophisticated technology would limit civilian casualties and make future wars regional rather than global, thereby limiting future U.S. casualties because local armies would be recruited to do the “heavy lifting.”

Those who defended the United States’ action in war in Viet Nam tried to justify carpet bombing and the use of napalm and Agent Orange by appealing to elements of the Just War Theory and the reasoning of MAD. Defenders of the war spoke of the “domino effect” and reminded the general public that it was better to fight wars on the turf of other countries than the turf of the U.S. President Nixon’s invasion of Cambodia, which he justified on the grounds that it was a “pre-emptive strike,” put the last nail in the coffin of the Just War Theory and signaled a shift away from MAD. President George W. Bush made the doctrine of “pre-emptive war” a foundation of his military policy when his administration accused Iraq of possessing Weapons of Mass Destruction. President Obama took the doctrine of “pre-emptive war” to its logical conclusion when he announced that the United States is now in a “perpetual state of war.”

The U.S. has come a long way. As a nation, it is no longer fighting enemy armies with proportional force in order to protect civilian populations. Now the nation is in a state of perpetual war against ill-defined ideas like “terror,” and launching pre-emptive strikes against perceived enemies who are, or who may be able to become a threat to “our way of life.” So fortified in such beliefs, in a matter of hours and for avowedly humanitarian purposes, in an act of undeclared war with an undefined aim, twenty-two missiles costing a million dollars apiece are sent into the capital city of an undeclared enemy. And, then, without pausing to take a deep breath, the leadership proceeds to announce that the national debt is out of control, the already shredded safety-net must be shrunk once again, unions must be stripped of their collective bargaining rights, the country is powerless to raise taxes, and nothing can be done to reduce national unemployment which stands officially at over nine percent, and in the black community is close to Depression levels.

In the pursuit of Realism the country has exchanged a vision of utopia for a moral myopia. Truncated vision and emaciated economics are signs of ethical ineptitude. What is needed now is a spiritual recrudescence; an awakening. Two measures of this new spirituality are: 1) overcoming a binary vision that divides the world into “us vs. them” thereby making the world more flammable and encouraging a culture of violence, and 2) replacing the atomistic economics of extreme individualism with responsible economics that contributes to the common good. People can begin in their own communities and with their own household budgets. And, with mutual encouragement and support, all can learn once again that the heart of a true democracy is an informed and engaged citizenry.