A couple of Sundays ago, here in South Dakota, I attended a worship service in a small local church whose parishioners are almost entirely of European descent. Helping to lead worship, as guests, were several members of a Choctaw-Dakota family, one of them an ordained clergyman. This man has been working with the church's white pastor over the last two years to build bridges of understanding between natives and non-natives in the community. When the two of them stood side by side, serving the bread and wine of communion to those gathered, it was, for many in the pews, a very powerful moment.

For many. But not for all.

Just after the service ended, as the congregants were walking toward Fellowship Hall to partake of their customary coffee and cookies, one of the fine women of the church--let's call her Geneva--remarked in loud voice, "I don't think we should be mixing with these Indians."

Fortunately, only white ears, and grown-up ears, heard Geneva's slur. Another woman cried out in vehement protest against it, but the violence of racial insult still hung ugly in the air.

Ignorance (and the hatred it spawns) does not go easily or quickly away. Nor does the damage it inflicts on those human beings who are its targets.

I'm fairly well acquainted with Geneva. I can easily speculate as to why she might have said what she did, sullying sacred space with her slander. Nevertheless, I remain angered by her bigotry. I'm sorely tempted to turn my back on her, to have nothing more to do with her, to sit with my coffee and cookies as far from her as I can get and say, "I don't think I should be mixing with people like her."

(As I was saying, ignorance, and the hatred it spawns, does not go easily or quickly away. Especially when it becomes self-righteous.)

Well, Geneva, I'm not going to walk away from you. Instead, I'm going to give you a song. I know you like music, after all. So, do me a favor, because we're friends. Lend this song your ear. 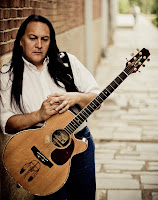 It's a song by Bill Birdsong Miller (pictured left). He's a Mohican Indian. He's a Christian (I know that's important to you). He's a son of Wisconsin and the Stockbridge-Munsee Reservation. He's won three Grammys. He's recorded almost 20 albums. He paints, he tells stories, he composes, he plays Indian flute, he sings, he plays guitar like nobody's business.

And now I want him to sing and play, just for you. All you have to do is listen. Nothing more. Just listen.

We all deserve a taste of it. All of us.

I believe in the promised land, Geneva. Some days, it's already here. And someday soon maybe I'll meet you on its sacred ground.

(Note: If you can't see the viewer embedded below, click here to watch the video. Lyrics to "Reservation Road" are provided for your convenience beneath the viewer.)

Let me take you down the reservation road….