We Can't Say No

We had a birthday party for a friend the other evening. Several of us took her out for dinner and then came to our home for dessert. There was good conversation and lots of laughs until we started talking about the crisis we're witnessing in education. In short, schools in our community, like schools all over the U.S., are taking enormous hits. Short sighted decision makers cut money from education budgets rather than tax those who have the wealth. 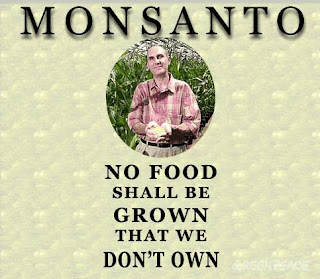 This conversation led to a question about the performance of the President of our University. I mentioned that most of what I had seen was positive, but I took exception to his decision to take a position on the Board of Monsanto, where he receives more compensation than he does as the President of the University. Then I made some disparaging comments about Monsanto, increasingly infamous around the world for their aggressive, environmentally destructive and unethical practices.
One of our friends took exception to my comments. He said Monsanto had done great things in advancing agriculture. And as we began to engage the disagreement, with some agreement on various points along the way; his contention came down to "we can't say no." Two of the friends assured me, if there was new knowledge to gain, new ways something might be done, new technologies to develop, new profits to pursue, someone would do it. I was pretty much told to get used to it, to accept it; that's just the way it is.
It reminded me of testifying in the controversy surrounding initial experiments with recombinant DNA. I was one of a few persons who raised questions about the wisdom of using e coli in such experiments, since it was a permanent resident of the human gut. The scientists who wanted to do the experimentation, already developing companies that could profit from the research, assured everyone of the safety and value of the work. I've seen the same "can do" attitude so often in the engineering community. It's always present with nuclear power apologists.
I look to our wisdom traditions for some of the reservoir of insight our forebears have left us. In the Hebrew scriptures, we have the mother of all living and the dust man reaching for the fruit of the tree of the knowledge of good and evil. In the Garden of Eden story, it's their downfall. They just can't say no.
It does seem to be a perpetual human problem. We rejoice when an addict is finally able to say no, and turns from drugs and self destructive behavior to contributing to the lives of others. But we have trouble saying no to science, or technology, or those who think they can find this secret or that secret, solve this problem or that problem; but, of course, they admit, there are risks. As the head of Duke Energy said to an interviewer, of course we'll go ahead with our plans to build a new nuclear power plant after the Japanese experience. There are risks in everything. Just crossing the street you take a risk. 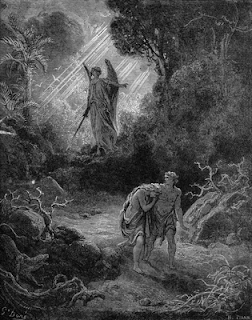 Personally, I think there's an enormous difference between my taking a risk crossing the street, and the "Duke" risking the lives and well being of millions, especially without their agreement.
As the evening drew to a close, there was a consensus in our small birthday group, that when you added greed to the pursuit of knowledge and its application, you were in jeopardy.
Perhaps we need to find ways to encourage some self discipline in those who are addicted to profit. It seems they are the ones brandishing the grasping hand; the one that would send all of us out of the Garden, never to return.
Carl Kline
Monsanto Poster from Greenpeace
Posted by Carl Kline at 7:10 PM