The current term for the weariness so many of us feel relative to the unremitting and devastating disasters to which we are exposed from day to day is “compassion fatigue.” As I contemplate the human cry from so many corners of the earth and feel the draw on my spiritual energies, I do, indeed, feel a sense of tiredness that does not go away with a good night’s rest. Just under the joys and satisfactions of each day’s unfolding there is a layer of sadness for the state of the world. 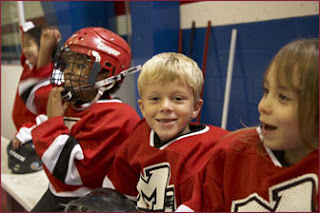 A few weeks ago, I attended my 11 year-old granddaughter’s final hockey game of the season. The teams are co-ed. The size of the kids ranges from “squirt” to almost adult height. I love watching my granddaughter on the ice - recalling her first attempts at skating – using a milk crate on the ice in front of her for balance when she was barely old enough to walk. Now, at 5’5”, she is the tallest on her team and a skilled player. The game was fast moving and exciting - - enjoyable. That is, until the first time I saw her get slammed by a member of the opposing team. At first, I justified it by telling myself that a certain amount of roughness is part of the game of hockey. But then a second, and a third, and a fourth “slam” against her by the same young man (also the tallest on his team) seemed excessive and I began to wonder what the referees were getting paid for. There seemed to be an unwarranted amount of aggression being acted out on the ice. The next day my granddaughter was diagnosed with a concussion - and was medically eliminated from the play-offs. Even children’s games are not what they used to be.

As I have reflected on my own responses to watching the aggression on the ice I have been in awe of how primitive my own emotions are when my grandchild is threatened. My inner desire to get out on the ice and show that young man a thing or two was a little alarming. Fortunately the viewing stands are well fortified against just such behavior on the part of excited parents and grandparents!

The news of disastrous events in Japan followed so quickly in the news cycle by the rebellion in Libya - - the political crises throughout that part of the world - - the accompanying grief and violence, depending on the location and circumstances - - all are overwhelming and tend to dull the senses after awhile. It took me awhile to make the association between the violence that both precipitates and accompanies revolution, the natural violence that accompanies dramatic changes in the structure of the planet, the violence that erupts in a kids’ ice hockey game – and a grandmother’s violent inner response to an attack on a loved one. I am ready to call it “violence fatigue.”

As I find myself feeling irritable and weary at the slightest intimation of discord or disharmony or disrespect, I realize how much energy it requires to attend to my own inner violence and to continue to summon up a compassionate, nonviolent response in my daily encounters with people who demonstrate their very short “fuses.”

I find myself more than ready to enter into Shabbat this evening – to find that elusive peace that comes with “getting off the train” for 24 hours – to remember that in the midst of and underneath everything there is an order that guides toward peace and harmony and a gentler, more respectful way of being - - 24 hours of honoring creation and letting it rest as well. 24 hours to regain balance, to recover, to restore my spirit, to rest, to let “violence fatigue” be replaced with energy for life once more.