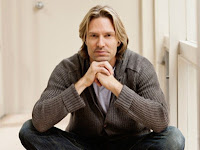 Eric Whitacre (pictured left) is an accomplished conductor and composer of classical choral music, one of the most performed composers of his generation. In the past couple of years, he has joined his talents with the voices of singers around the world to present a new type of choral performance: the "virtual choir."

Whitacre's most recent effort, just released in April, is a virtual choir performance of "Sleep," a piece he composed in 2000, using lyrics penned by his good friend Charles Anthony Silvestri.

The virtual choir's performance of "Sleep" was an incredibly ambitious and technologically demanding project. To quickly summarize, last summer Whitacre recorded a video of himself conducting the a cappella choral piece, then added a piano track to aid the singers, who were yet to be recruited. Next, to muster a massive company of sopranos, altos, tenors and basses, he published a blog post inviting participation in the "world's largest Internet choir," welcoming vocalists of any age.

Within just a few hours after Whitacre's blog post appeared on the Internet, three singers (two from the United States and one from Portugal) uploaded to YouTube videos of themselves performing their choral parts to "Sleep," sung in sync with Whitacre's conducting video. By the submission deadline in January of this year, those first three singers were in the happy company of 2,049 others, from 58 countries around the world, from Madagascar to Thailand, Egypt to Vietnam, Malta to Israel. They lived in places as far north as Alaska and as far south as New Zealand.

The audio was eventually extracted from all the singers' video files. Then those 2,052 audio tracks were individually synced to the conductor track. Gradually, with much high-tech and musical effort on the part of sound engineers, Whitacre and others, the "whole choir sound" was developed. At last, the soundtrack was integrated with visuals to create the virtual choir video, which debuted on YouTube in April.

The performance (see video below) is beautiful beyond belief.

Reflecting on this creative experience at Ted 2011, Whitacre said that two things had struck him deeply. "The first is that human beings will go to any lengths necessary to find and connect with each other. It doesn't matter the technology. And the second is that people [who participated] seemed to be experiencing an actual connection. It wasn't a virtual choir. There are people now online that are friends; they've never met. But, I know myself too, I feel this virtual esprit de corps, if you will, with all of them. I feel a closeness to this choir, almost like a family."

As I've watched and listened to this video, many times over, and as I've considered the incredible effort that went into its creation--not only on the part of Whitacre and his techie friends but also on the part of the singers, many of whom apparently did dozens of takes, trying to perfect their parts before uploading their best performances--I too have been deeply struck. By many things. Perhaps most especially by the humanizing effect of the technology that is at work here.

I confess: I harbor great suspicion of much of today's interactive technology. I've been avoiding Facebook like the plague. I decline to carry a cell phone unless traveling (and then I rarely turn it on). As a friend wrote me recently, "If you have the technology and use it, the usage tends to expand and consume more and more of your life and time. How much is too much of a good thing?"

It's difficult to keep technology in its place, where it enriches life instead of distancing us from it, where it connects us to others and deepens relationship instead of distracting us with superficial and time-consuming busyness. In the latter case, I believe, interactive technology ironically makes it more possible for us to ignore one another, or to not appropriately value one another, or even to do violence to one another, in words if not also in deeds.

But Whitacre's use of technology--this, to me, is beautiful. The lyrics of "Sleep" are not, for me, the source of its power. The source of its power is the blending of the voices. Thousands of voices, from thousands of places. Thousands of voices who are stories, who are lives, who have dignity and value in their own right just because they are. Hearing their voices, we know that they are. Hearing their voices together, we know that the world is, and we also know how the world can be.

Upon my pillow, safe in bed
A thousand pictures fill my head
I cannot sleep my mind's a flight
And yet my limbs seem made of lead