We had this month's gathering last evening of our Inter Faith dialogue. We met at the local Islamic Center. Our format is to gather for food prepared by our hosts for the month, followed by an informal conversation. We go around the room asking each person to introduce her/him self and then the floor is open for questions and comments. Last evening the conversation was shaped by areas of theological and ethical agreement, especially as it related to Christians, Muslims and Hindus. We were missing our usual representation from Baha'i and Buddhism. But the presence of two new agnostics led to searching questions that the traditions present sought to address. It was a stimulating and enlightening conversation. It was doubly useful because of the presence of a dozen university students from a World Religions class.
I left the meeting feeling encouraged about how dialogue can undermine the conflict mentality underlying the public perception of religion. It was obvious how easy it was for people of different faiths to talk with each other; it wasn't necessary to kill each other.
My students seem to "get it." Two weeks ago, after already addressing some difficult material in church history, I asked them if they were ready to talk about the crusades. To a person, they said "no." So we moved on to different material. This past week, intent to include the reality of holy war as part of Christian reality, I presented some of the pronouncements of church leaders of the time. After talking about St. Bernard and the order of warriors he founded, one of my students asked, "why is he a saint? Why didn't they take his sainthood away from him?" 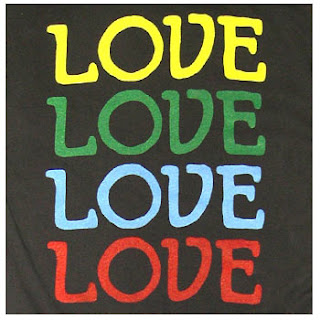 One of the student participants last night had on a sweatshirt that said LOVE. It was in large, colorful letters. It was clear from the conversation that those present saw a core teaching in all the traditions represented by that word. It isn't so hard.
So imagine my disappointment when I discovered this noon that a former defense department official is coming to South Dakota next week to spread fear of a "stealth" terrorist network in the United States. He will be joined by a state senator concerned about possible sharia law. The gathering is being sponsored by a Catholic organization called Mary's Project. Honestly, I wonder where these people live their lives. Did they ever hear that "love casts out fear?" Have they had any serious dialogue with followers of Islam?
There was consensus last evening that there are people who misunderstand the traditions of others. There was a consensus that there are those in all traditions who are bent on violence. And we definitely need to confront the violent, the terrorist, wherever they are. Since many of them use religion as an ideology to prop up their actions, we can confront them by collapsing their props. We'll do that with dialogue and mutual support; not with spreading fear and conducting witch-hunts.
Carl Kline
Posted by Carl Kline at 3:20 PM