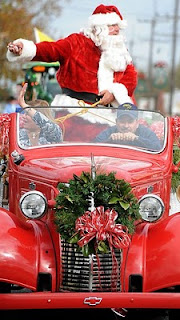 When I was a child living in a lake front community in Ohio, we would have an annual Christmas parade. There would be a few floats, a band or two, and the first appearance in our town of Santa Claus. Always, as he passed in the parade, Santa would throw candy out for the children lining the streets. I was quick at that age. I also knew from experience when to dash out for as many pieces of candy as possible. This particular Christmas I got more than usual, certainly more than I needed to satisfy my sweet tooth. As I returned to my place on the sidewalk I became aware of a small child crying. He was too slow. He didn't get any. He made me sad and I impulsively gave him several of the pieces I had just grabbed.
It was my first experience with greed and giving. In that moment, I knew how both greed and giving felt. And the fear and violence that accompanied my childhood experience of greed didn't feel half as good as the satisfaction that accompanied the giving.
If we examine it closely, fear drives greed, and violence is its companion. Gandhi says as much in his writing. "If you search enough, you will find that greed is a variety of fear." Harijan: Dec. 8, 1946. "Greed and deceit are often the off springs, as they are equally often the parents, of violence." Young India: Feb. 6, 1930.
I'm thinking about greed this morning in relationship to so many things. I learned of the earthquake in Japan on the internet after waking today. Then as I went for my morning coffee, a news broadcaster on the radio was asking a reporter in Japan how it was affecting the economy, eight hours later. Economy was his primary concern in the face of an immense human and ecological disaster.
And I'm thinking about all of the attempts to balance budgets in the U.S., on the backs of the poorest and most vulnerable. In my home town, some 300+ people turned out on a snowy Saturday morning to challenge state legislators about proposed cuts to education. Many asked them to consider balancing the budget with new revenue streams (in a state with no corporate or individual income tax) rather than simply cutting programs. The situation in Wisconsin is well known, though fewer are aware that busting unions was the second gift to corporate business interests. The first gift was millions of dollars in tax breaks, enough to cover the state deficit.
After decades of conditioning in "survival of the fittest," "me first," and "getting ahead;" after decades of educating young people for their place in the job market rather than their place in the universe (the original purpose of a university); after decades of people gambling on "making a killing" rather than "making a living;" after decades of advertising in consumerism and materialism; we're seeing the results.
We're seeing the results in the concentration of wealth in fewer and fewer hands. According to a 2008 report by the U.S. Government Accountability Office, 25% of the biggest corporations pay no federal income taxes. Bank of America, the recipient of $45 billion in U.S. bailout funds, shuttles its would be tax dollars into 115 off shore tax havens. The money in my wallet (which isn't much, maybe $15) is more than Bank of America, GE and Exxon Mobil, together, paid in federal income taxes last year. www.usuncut.org With greed, the commons, filled with crying children, is ignored, and the common good is disregarded.
The good news is, giving is satisfying. And love casts out fear. Gandhi says: "If my life were regulated by violence in the last resort, I would refuse to give an inch lest an ell (the length of a man's arm) might be asked for. I would be a fool if I did otherwise. But if my life is regulated by nonviolence, I should be prepared to and actually give an ell when an inch is asked for. By so doing, I produce on the usurper a strange and even pleasurable sensation. He would also be confounded and would not know what to do with me." Harijan: Nov. 10, 1940. 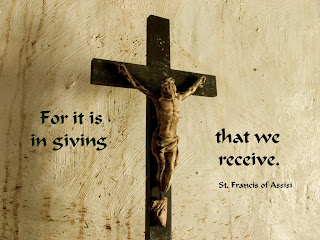 One by one, we need to reclaim our people and countries for a culture of nonviolence, where giving for the common good replaces the fear and violence of greed. It's much healthier for us as human beings and it's a lot more fun.
Carl Kline
Posted by Carl Kline at 9:57 AM