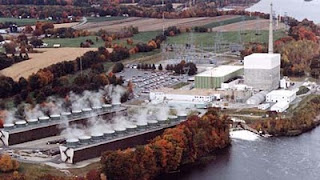 I wrote the U.S. Nuclear Regulatory Commission the other day. I read an article where they had re-licensed for twenty more years a forty year old nuclear reactor (Vermont Yankee) like the ones we're worried about in Japan. I received back a form letter where I was assured they "understood my concern." They didn't understand it at all!
(I don't know why I thought my comments would make a difference. The NRC didn't listen to the people of the state, the Vermont Congressional delegation, the Governor, or the state legislature. The state Senate voted 26 to 4 against re-licensing when the current contract with Entergy, the operator, expires in 2012).
One thing the NRC didn't understand was I have a strong personal investment in this issue. I'm suspicious that my father's ill health and eventual death began with an "accidental," and hidden from the public, release of radioactive material from a nuclear site in Ohio. Secondly, my daughter and her family live near the Entergy run nuclear plant in Plymouth, Massachusetts. This plant, with a similar design to the one at Fukushima, is storing four times as many spent fuel rods as the design allows. And, with the catastrophe in Japan, it's become quite clear that nuclear power is a good avenue for poisoning our (my) whole planet.
The apologists try to make us think the world is so big and dispersion so extensive, that any increase in radiation will not affect human health. Their death toll from Chernobyl stands at around 4,000. The critics contend it's closer to a million. Wherever the truth lies, there is no "safe" dose of radiation, especially for unborn children, infants and the elderly. So people wonder, about the air we breathe, the rainwater we drink, the food we eat. We wonder if the "exclusion zone" around Chernobyl will ever be filled again with pine trees, with birds and deer and human homes. And how big will the exclusion zone be around the Fukushima plant? Where will the human environmental refugees go? And what about the fish and fowl in that part of the sea; where will they go? 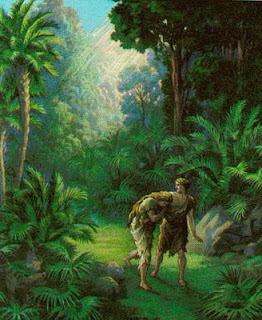 I keep thinking the Hebrew scriptures have it right. There is a basic human problem. Christians often call it original sin, where humans reach for the apple that makes them like God. I call it pride, self righteousness, arrogance. We see it all around us as people tell us they "understand our concern." They don't, in my humble opinion!
Carl Kline
Posted by Carl Kline at 10:42 AM