Open Letter to the Protesters in Tunisia and Egypt 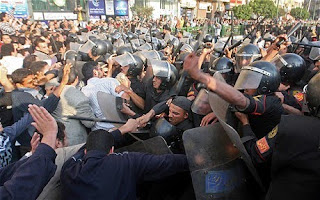 I've been watching you, and listening to you--first in Tunisia, now in Egypt.

I admire you young people, most of all:
In this revolution you have the most to lose, and the most to gain.
I admire your vision. I admire your courage,
which moves you to speak and to act
in the face of tremendous risk.

I admire your not waiting any longer,
your refusal to abide any more excuses,
your seizing of the day.

I admire your trust in one another.

I admire your criticism of us on the outside who are afraid
of "instability" and "spiking oil prices"
and "a possible terrorist regime" taking Mubarak's place.
I admire your making us Americans look in the mirror--
if only we will actually look, and see.

I admire your asking us what in fact we mean when we say, repeatedly,
that we value freedom more than anything,
that we regard it as a universal human right,
that we will support any and all around the world who seek it.
Do we in fact believe what we say,
or do we mouth the words and live them out
only when it is expedient, serving our own best interests?
Do we in fact believe what we say,
even as we supply the tear gas canisters and rubber bullets
now being used against you, who so long for freedom?
I watch. I listen. I admire.
But I also fear for you, there in the streets.
I remember the violent crackdown in Iran,
just a couple short years ago.
I remember Tiananmen Square
as if it were yesterday.

Today, you women and men march a million or more strong
into Cairo's Tahrir Square--"Liberation Square."
And I sit here, writing you this letter
that you will probably never read.
I write you as worried sister, aunt, mother.
I am writing to say
I am helpless to help you,
but still I will try to help you.

At the moment, I give you prayer.
This prayer, in music, is "Bring Him Home,"
from Les Misérables, a musical based on Victor Hugo's 1862 novel
of the same name, set in early nineteenth-century France,
as the citizenry made revolution against its own Mubarak.
The song is sung in this video by Colm Wilkinson,
who plays Valjean, the protagonist.

Valjean has arrived at a barricade
that the young people of Paris have erected
on the eve of the 1832 Uprising.
He is searching desperately for Marius,
a young man toward whom he feels like a father.
He finally finds the young man asleep, resting before the looming battle.

Valjean pleads with God
that his "son" not come to harm
in this fight for freedom.
That same desire now flows through me,
as I sit in front of my computer and my television,
so safe,
watching you, listening to you.
May all of you in the streets come home tonight,
and the next night,
and the next.

(Note: Lyrics are provided below the viewer. If for some reason you can't see the viewer below, click here to watch this video.)

He's like the son I might have known
If God had granted me a son.
The summers die
One by one
How soon they fly
On and on
And I am old
And will be gone