Standing with One Another on the Great Stage 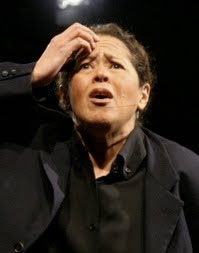 What do legendary author Studs Terkel, convict Paulette Jenkins, a Korean-American shopkeeper in Los Angeles after the ’92 riots, and a rodeo bull rider have in common?

Well, for one thing, the magic of Anna Deavere Smith.

Deavere Smith, a prize-winning actor and writer who has been hailed by Newsweek as "the most exciting individual in American theater," brings all of these characters and many more to life in her solo show "On the Road: A Search for American Character." The 23-minute video below is a thought-provoking excerpt from that show.

Deavere Smith is said to have created a groundbreaking form of theater. Her work combines the journalistic technique of interviewing people with the art of interpreting their words through drama. She has been interviewing individuals across the United States for more than 20 years, then translating those real-life encounters into gripping onstage monologues, presenting word for word the original recorded interviews ("organic poetry") of those with whom she has spoken. With an uncanny ability to seemingly inhabit the souls of the people she's representing, regardless of who they might be, she helps her audiences explore such issues as race, identity and community.

Through Deavere Smith's magic, we hear in this video Studs Terkel lamenting how "the human touch is disappearing," how "there ain't no defining moment in American history [but] an accretion of moments that add up to where we are now, where trivia becomes news, and [there's] less and less awareness of the pain of the other." Then, in a study of "the negative imagination," we hear inmate Paulette Jenkins describing the night when he 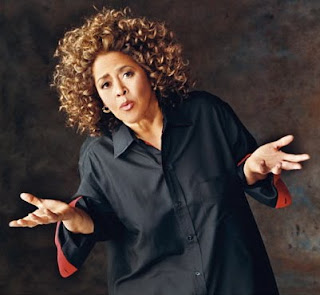 r husband, in domestic rage, inflicted a torturous death on her young daughter, while she herself, in a drugged stupor, listened to the brutality from the next room, and eventually helped cover up the murder. "My own chil', I let that happen to," Jenkins says, in bewildered voice.

We hear Mrs. Young Soon Han, a Korean-American shopkeeper victimized by rioting African-Americans after the four policemen accused of beating Rodney King were acquitted in 1992, "swallowing the bitterness." "Where do I find justice?" she asks, this woman who Deavere Smith says has taught her more about race relations in the United States than anyone else. "The fire is still there," Young Soon Han declares. "It can burst out any time."

Finally, there's Brent Williams, rodeo bull rider. Hear him talk about toughness, and maybe you'll begin to believe that you, too, can survive almost anything.

The greatest magic of Anna Deavere Smith may be that she helps us understand that in our particularities is found what is most universal--our shared humanity, our common wish to love and be loved, our common desire to be happy and avoid suffering. This is the Great Stage on which all of us stand, and there is no exit but death, so perhaps we would do well to learn better, from Deavere Smith among others, that we can indeed bear witness to one another, and make sure that no one is left standing all alone.

Note: If for some reason you can't see the viewer below, click here to watch the video.