What Are You Doing with What You've Got? 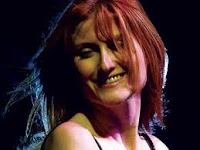 Back in the 1980s, Scotland-born singer-songwriter Eddi Reader was a British pop star with her band Fairground Attraction. Today, as a solo artist, her sound has matured: quiet acoustic arrangements and gentle harmonies put her lush voice front and center. The content of her songs has evolved as well. Especially moving are her wistful songs of love, longing and loss, and also her "message songs", as they're sometimes called, which invite us to think about such subjects as war and peace, the Earth and our place in it.

In the video below (from 2003), Reader joins with pianist Thomas Dolby and an unnamed guitarist to perform "What You Do With What You've Got," her rendering of a song composed by Si Kahn. It's a beautiful meditation on the theme of how we might use our talents and gifts to make a difference in the world. The lyrics have been provided for your convenience.

Notice that before Reader sings, she removes her shoes. The reason why is anybody's guess. In the world of my imaginings, she's preparing herself to do sacred work.

What she does with what she's got is holy indeed.

WHAT YOU DO WITH WHAT YOU'VE GOT

Which ones touch the sun...

Note: If for some reason you can't see the viewer above, click here to watch Reader's performance.
Posted by Phyllis Cole-Dai at 9:00 AM