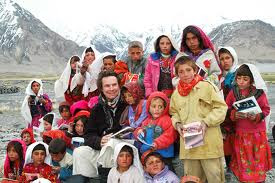 Two events in two nights inspired me. The first was a visit to our community of Greg Mortenson. If you haven't heard of him yet, he's the author of "Three Cups of Tea: One Man's Mission to Promote Peace ... One School at a Time;" and of "Stones into Schools: Promoting Peace with Books not Bombs, in Afghanistan and Pakistan." He's the founder of the Central Asia Institute (www.ikat.org).
Greg spoke to a crowd of 5,000 people on the campus of South Dakota State University. He brought the war in Afghanistan home in stark terms. Since it costs the U.S. $1 million to keep one U.S. soldier in Afghanistan for one year, he suggested we bring 240 of the thousands there home. If we did, we would have $240 million, the same amount of money Pakistan needs to cover all University education, country wide. After all, it is education that defeats terrorism. Bombs only create more terrorists.
I find Greg and the work of the Institute inspiring because it is the most clearly articulated and demonstrated nonviolent alternative to the waste of war in that region of the world. None of his 150 schools, most of them specifically for girls, have been destroyed. The Taliban must respect them, since building materials are only supplied with the visible support and labor of elders and village people. One can only image what a foreign policy based on building, not bombing, might accomplish. It might dry up the sea in which terror swims. 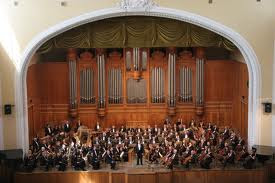 If this wasn't enough inspiration for one week, the very next night we were treated to the Moscow Symphony Orchestra. How little Brookings, South Dakota, ended up as one of the few cities on their national tour is unknown to me. But they played to a full and enthusiastic house. They were a joy to watch as well as to hear. They received standing ovations after each piece and the appreciative audience was treated to three encores at the end of the regular performance.
I couldn't help but think back to an earlier time, when South Dakota was the home of the minuteman missile system. Ranged across the Western plains were one hundred fifty nuclear missiles, each with a one megaton nuclear warhead. They were pointed at the Soviet Union, perhaps at the home of some member of the orchestra. Fortunately, because of the hard work of peace people, the eventual wisdom of decision makers, and perhaps the grace of a merciful God, the policy of MAD (mutual assured destruction) was ended and mutual reductions ensued. One can only hope a new group of cold warriors don't decide to take us down that road again.
As I sat listening to the orchestra, I marveled at the ability of music to cross those barriers of language, culture, nationality, politics, ethnicity, etc. It's a great equalizer. The harmony implicit in music exposes and releases the harmony in being human, together. It was inspiring!
Carl Kline
Posted by Carl Kline at 1:57 PM