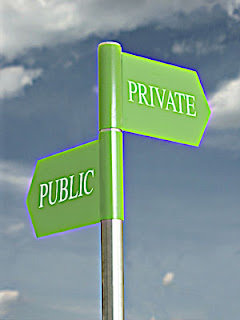 When my children were young, I used to feel the tension between public and private life most pointedly when after supper it was time to go out for yet another evening meeting or program. I vividly remember one time when my oldest daughter wrapped herself around my legs at the door crying for me not to go out. These were moments that tore me apart and made me wonder what in the world I was doing, what was wrong with my priorities and was there anything to do about it. I tried to console myself by thinking about all that I did do with the kids and the time we did spend together. I was left in those moments, however, wondering at the perception that my children had of their father and that those I was meeting with had of their rabbi.

In truth, while the relationship between home and community and public and private expressions of self can be fraught with challenge, experiencing the tension as challenge is itself the start of wresting toward a healthy balance. Danger begins when there is no experience of such tension, when a person can dwell in two separate realities without thought to a consistent expression of self and character, when there is a disconnect between public and private perception and behavior. It is the all too familiar tragedy of great leaders who are heroes among the people and failures at home.

I find this tension expressed in the Torah portion called Vayera (Gen. 18-22), as the unstated obverse of critically important moral teaching drawn from two words in the portion. A thematically packed Torah portion, it is in Vayera that Abraham draws near to challenge God on behalf of the people of the violent cities of Sodom and Gomorrah. As Abraham begins his dramatic challenge to the Judge of all the earth whom he fears is not doing justly, he asks, perhaps there are fifty righteous within the city. Will you indeed destroy them and not forgive the place for the sake of the fifty righteous? Abraham persists, pleading for the sake of the righteous, in ever diminishing number, by whose merit he hopes the cities will be spared, until he stops at ten. Then we are told very simply, and Abraham returned to his place. The ensuing silence throbs with the obvious question, why did Abraham stop at ten? Was there not even one righteous person? As the rabbis wrestle with the question, just as we are meant to, so they answered it, their own struggle with God’s justice hanging on the words within the city.

There may indeed have been people who were decent and righteous within their own homes, but who never raised their voices publicly against the violence and cruelty surrounding them. Sadness rising from the page, of these who were decent people at home, the rabbis said, not one of them protested. The righteous person for Abraham, explains Rabbi Samson Raphael Hirsch (nineteenth century Germany), “is to be found within the city and in lively connection with everything and everybody. He never leaves off admonishing, teaching, warning, bettering wherever and however he can. He takes everybody and everything to heart, he never despairs, is never tired of trying, however distant the hopes of success may be.” At whatever cost to her or his own life, the truly righteous person stands up in the public square for what is good and just.

This is a teaching that has inspired me and given me strength throughout my life. There is no question of the moral power of the still small voice that thunders against apathy and avoidance. It is the challenge so bravely met by righteous gentiles who saved Jews during the Holocaust. It is our challenge. Precisely in the majesty of Abraham’s challenge and in the moral greatness of those who rise to meet it is the challenge of its obverse; it is not enough to be righteous within the city, but no less are we called to be equally righteous within our own homes, within the house. In this very same Torah portion, from the very same people, we witness the tragedy of that moral disconnect between the public and private spheres of one’s life. For all of the moral courage and grandeur of Abraham’s plea on behalf of the violent people of Sodom and Gomorrah, he does not say a word on behalf of his own son when God tests his willingness to speak for his own. Such is one strand of classical response to the binding of Isaac. His righteousness tested at home, on behalf of his own, and Abraham fails miserably. And so too, Abraham’s nephew Lot, in order to protect strangers who have taken refuge under his roof, is willing to sacrifice his own daughters to the violence of the mob.

In the extreme disconnect presented in these chapters of Genesis, between behavior both public and private, is the wholeness of the teaching. The way of the truly righteous is of one path on either side of the threshold, whether “within the city” or “within the house." To the degree that we hear the cry of the child wrapped around our legs, so may we hear the cry of all children and, counted among the righteous, create together a world of wholeness both near and far.

Rabbi Victor H. Reinstein
Posted by Carl Kline at 9:00 AM