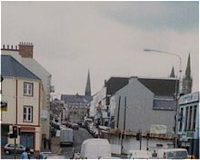 On Saturday, August 15, 1998, a terrorist car bomb ripped through bustling Market Street in the Irish town of Omagh (see pre-bombing photo, left). An apparent attempt by members of the Real Irish Republican Army (RIRA) to sabotage the fragile peace process after the historic signing of the Belfast Agreement thirteen weeks earlier, the bombing was described by the BBC as "Northern Ireland's worst single terrorist atrocity". Twenty-nine people died. Around 220 were injured. Among the victims were both Protestants and Catholics, as well as a Mormon, nine children, a woman pregnant with twins, and a number of tourists.

This bombing, for which the RIRA apologized three days later, actually led to greater local and international support for the Northern Ireland peace process. And amidst all the grief and regret and outcries for reconciliation there arose--

Daryl Simpson, having just graduated in piano and voice from Queen's University in Belfast, responded to the Omagh tragedy by founding The Omagh Community Youth Choir. He brought together young people from various backgrounds and religious traditions in Omagh to sing together, to exemplify a community working together for peace, and to provide some comfort to a town suffering deeply from "the Troubles". Established in October, 1998, just two short months after the bombing, the choir has since toured all over Ireland and the world at large to popular and critical acclaim.

In this video The Omagh Community Youth Choir performs "Lo

ve Rescue Me" (composed by Bono and Bob Dylan). You'll also hear Daryl Simpson describing his vision for the choir as well as the role music can play in comforting, inspiring and healing a society.

I've included the lyrics of the song below for your convenience as well as your reflection.

May love rescue all.

Love rescue me
Come forth and speak to me
Raise me up and don't let me fall
No man is my enemy
My own hands imprison me
I said, Love rescue me

Many strangers have I met
On the road to my regret
Many lost who seek to find themselves in me
They ask me to reveal
The very thoughts they would conceal
I said, Love rescue me

And the sun in the sky
Makes a shadow of you and I
Stretching out as the sun sinks in the sea
I'm here without a name
In the palace of my shame
I said, Love rescue me

(Note: If for some reason you can't see the viewer above, please click here to watch the video.)