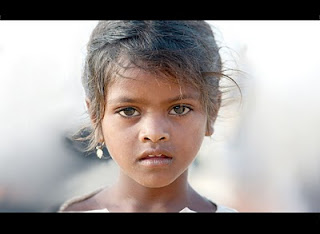 There are some images that seem to stick in your mind forever. If they're sweet, they are like honey or jam on your finger, after fixing some tea or toast. You are grateful for the small surprise, and you savor it.

If the image is ugly, it's more likely to stick like pine sap, or old masking tape on glass. You'd just like to find a way to shorten it's endurance or remove it.

I have both images, sweet and ugly, residing in my image memory. The sweet one is old; the ugly one is new. The old image is of a small girl, probably five or six years old.

India was hosting the Asian games and Delhi was getting a cleaning. All of the poor living on the streets were herded onto buses and transported several kilometers outside the city, where they were dumped with nothing but the clothes on their backs and some broken brick. Here they were to construct a shelter and find a way to survive, at least till the games were finished. (Actually, there were three or four houses already built when people were dumped. They were made from cement block by the government. They were to be raffled off to these homeless people. To apply, of course, one had to be sterilized.)

My small girl was part of this homeless population. She was one of a crowd of homeless children who gathered around us, as we toured new made shelters, marvelous works of broken-brick art. Our eyes met for perhaps twenty seconds, long enough to burn her image in my cells. The next time her image appeared, like honey, was at a spiritual retreat. We were to imagine walking with Jesus through a garden. I couldn't picture Jesus. Then, surprise! She appeared, slipping out of a hazy past at a telling time.

Last week I saw a film from Burma. It was filmed by undercover video journalists. They documented some of the events of the 2007 revolt against the military dictatorship. The journalists were risking their lives to keep some knowledge flowing of what was transpiring in their closed society.

The most inspiring footage is of the Buddhist monks marching through the streets with the cheering crowds applauding. The sense of hope and joy is palpable. One is humbled as they kneel in front of the military blocking the street, to chant prayers of compassion, that all might be freed from fear, from distress, from poverty. It's clear the soldiers are included in the prayers. And then comes the ugly image, a bloated, purple robed body, floating in the river. 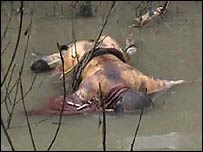 At first, I focused on those who committed the atrocities in Burma. How could they do this? What sort of demons possessed them? But now, I'm focused on who inhabited that body in the river. What discipline, what conviction, what training, allowed him to be part of a nonviolent and compassionate movement, in the face of probable murder?

I'm beginning to think the ugly image, so hard to remove, is hard for a reason. Buddhist monks meditate on their own skeleton in recognition of the temporality of life and to be fearless about letting it go. It's a good learning for folks committed to nonviolence. M. L. King said, if there isn't something in our life worth dying for, we're not fit to live.

Increasingly, as I admit the integral relationship of death and life, the power of the ugly image fades. For me, like the sweet image, it also becomes a portrait of Jesus, ... or Buddha.