When the government of the United States and its allies launched its “shock and awe” terror campaign against the people of Iraq, I quit my job and reduced my income and expenses so that I could live below the income tax-paying threshold and stop my financial support of the U.S. war machine.

I realized that it wasn’t enough for me to say that I disapproved of the war, or that I wouldn’t put on a uniform and go carry it out. In matters like this, the government relies on our practical, financial support more than on our moral support... more even than on the support of those who directly carry out the politicians’ orders. 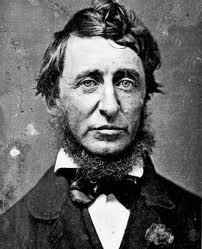 Thoreau wrote: "I have heard some of my townsmen say, 'I should like to have them order me out to help put down an insurrection of the slaves, or to march to Mexico, – see if I would go;' and yet these very men have each, directly by their allegiance, and so indirectly, at least, by their money, furnished a substitute. The soldier is applauded who refuses to serve in an unjust war by those who do not refuse to sustain the unjust government which makes the war..."

In this way, at least, the “peace movement” hasn’t changed much since 1849, when Thoreau wrote this passage in Civil Disobedience. By and large, pacifists and anti-war “activists” disapprove of war, parade and preach against it, but pay for it all the while.

That wasn’t going to be good enough for me. I was having a hard time sleeping at night, and a hard time looking myself in the mirror in the morning. I knew that as long as the government had my practical support, my refusal of moral support was just for show. To follow my conscience I would have to put my money where my mouth is.

I decided to withdraw my practical support as well, particularly my taxes. I started working for my values instead of against them. I quit my job and deliberately reduced my income to the point where I no longer owe federal income tax. I transformed my life, concentrating on what really matters, so that I could live well and securely on a lower income. (As a bonus, I came to find that my lower-income lifestyle was more fun, fulfilling, and interesting than the life I had been leading before.)

I went in to tax resistance blindly, following a moral imperative rather than a how-to guide. I’ve since learned that there are many different methods of tax resistance, and that you can find a wealth of information and accumulated experience about using these methods from http:www.nwtrcc.org the National War Tax Resistance Coordinating Committee. Over the last several years, I’ve been refining my tax resistance by listening to the advice of people who have been doing this for decades. People in war tax resistance circles sometimes remark that there seem to be about as many methods of tax resistance as there are resisters. This can make it confusing to talk about “war tax resistance” as though it meant one particular technique, but the plus side to this is that there are many techniques to choose from, depending on things like your family, job, and financial situation, what goals you want to achieve, and what risks you are willing to confront.

Sometimes otherwise well-meaning people discourage tax resistance by pointing out good things that the government does with our money. The U.S. government may spend as much as the rest of the world combined on the military, may threaten everybody with the worlds most fearsome arsenal of weapons of mass destruction, may shamelessly practice torture, may imprison on a mass scale, may have military outposts all across the globe – but if we stop paying taxes, won’t we also stop our contributions to such worthy collective projects as social security, health care, support for education and transportation, food stamps, environmental regulation, and the like?

When I hear this argument, I try to imagine a favorite charity: maybe Amnesty International, or Habitat for Humanity, or Doctors Without Borders... something like that. What if I learned that my favorite charity were spending half of the donations I send to them on a campaign of murder, brutality, and torture? Would I continue to send them checks to support the good things they were doing with the other half of my money, or would I find another charity to support?

Nothing about tax resistance prevents you from contributing your time and money to beneficial projects. It just means that you intend to do so in a way that doesn’t also contribute to the plague of government-led violence.

If I want to be nonviolent, disapproving of violence is not enough, not lifting my hand to strike another person is not enough, even chasing violent intentions from my heart is not enough: I have to consciously trace the practical effects of my actions, including my superficially nonviolent actions, through to their effects. People who think of themselves as nonviolent may be torturing, maiming, and murdering by writing checks and licking stamps, or by remaining passive when a portion of each paycheck is withheld for war – “just following orders” like any other garden-variety war criminal.

We know that there are places in Nevada where people sit at computers and fire drone-based weapons half a world away. Their physical distance from the anguish they inflict does not amount to a moral shield. The same is true for those of us who send the checks to buy the drones – another essential link in the same chain.

Living nonviolence means striving to live 100% of our lives nonviolently, not just the percentage the government deigns to let us keep after taxes. War tax resistance is an essential technique for pursuing the goal of a nonviolent life and a just, peaceful world. 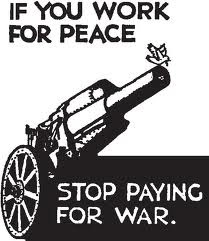