One of the many things we (my friend Robert and I) did while we were in India a little more than a month ago, was drive and walk through a wide variety of villages. For the short amount of time we spent driving/walking through the villages, one thing was particularly apparent: there was no lack of happiness. The people were generally very helpful when asking for directions. Unlike many places I’ve visited in the past, they want you to successfully get to your intended destination. Another thing that stood out from any other place in the world is the smell. The scent of manure, kerosene, cooking, dust, and livestock among other things, made for a wretched combination of smells, but yet it’s so satisfying. 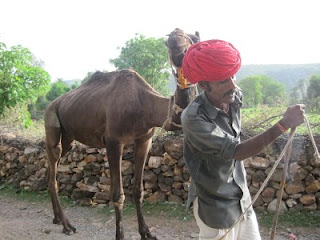 One village stood out more than others though.

One evening Robert, my uncle Bhargav, my cousin Neeraj, and I went for a drive in the country side of a city in Rajasthan called Udaipur. The roads curved through the very hilly and dry landscape. If the word “serene” had a visual definition, that particular landscape would define the word. We eventually drove through a very small village where agriculture seemed to be the focal point of the dwellers lives. The first thing we saw was a man who was trying to get his camel to go a certain direction. After mild difficulty, he finally managed to become successful. 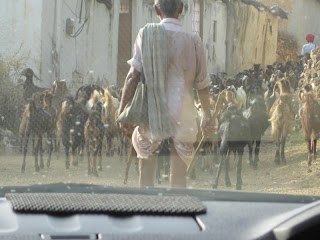 Shortly after driving on the narrow path, we had to stop because of a herd of goats which was led by a man wearing all white. The instant after, we saw three or four kids: all around the age of six. They saw our cameras and decided to pose for us in a pseudo-western kind of way. We kept on taking pictures and noticed these kids having a very good time.

When we arrived back home in Udaipur I went through the days pictures and realized something. I realized how happy those kids were. I have never seen anyone else as excited about living as they were. They inspired me. Something about that picture made me question my own happiness. 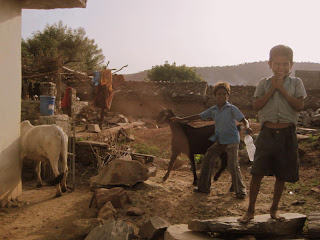 Someone who has so little is so happy while I have so much more and am probably not as happy. How is this possible? The child in the picture made it very clear that money cannot buy happiness. That statement is obvious, but the way it was reiterated is what made it so unique. It’s the little things in life that create a joyous world, not material things.

When arriving back home in Brookings, I realized even more how many things we take for granted. Running water, electricity, certain foods, and accessibility to almost any product are all things among many others that I learned to be careful about in terms of conservation. People in villages live off very little of the things mentioned. Electricity is something few villages have and must live without. If electricity in Brookings alone were to be shut off for one full day, almost nothing could be accomplished. Having no electricity any longer could result in the town being completely functionless. At the same time villages are able to accomplish many things without electricity. Everything is done manually, which is healthier for both the world and the people. Even though we live in a society with different standards and demands, a new approach at the utilization of electricity and water wouldn’t hurt.

Everyday people go about their lives without knowing how much they have and let it slide as if it didn’t even exist. It takes a substantial loss in their lives to realize what great things they do posses, but then it’s too late.

Abhay Mistry, Guest Blogger
Freshman at University of Nebraska
Posted by Carl Kline at 8:30 AM