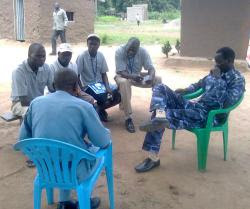 Two months after the deployment of the first unarmed civilian peacekeepers to Mundri, Western Equatoria State, the NP Sudan team successfully facilitated a discussion in the village of Kediba, in Eastern Mundri County, between agriculturalists and pastoralists regarding the raiding of cattle. Prior to NPSD’s engagement tensions were running extremely high, and both communities were preparing to engage in violent conflict. NP’s team of local and international peacekeepers facilitated a meeting between the Paramount Chiefs and elders of the two communities at which it was agreed that the raided cattle would be returned. As a result the two communities have returned to living in a state of peaceful coexistence. The success of NP’s first intervention in South Sudan demonstrates the wish for peace amongst the citizens of South Sudan, and willingness to engage in non-violent methods of conflict resolution.

Western Equatoria is a state in the southwest corner of Southern Sudan. It was devastated by the 21 year long civil war which was fought between the Sudan People’s Liberation Movement/Army (SPLM/A) and the Government of Sudan, based in Khartoum. The war was ended in 2005 by the signing of the Comprehensive Peace Agreement (CPA). Under the terms of the CPA a referendum on independence for South Sudan is scheduled for January 2011. Tensions are building in the run up to the referendum, not least because the traumatised communities of South Sudan remain divided along ethnic and tribal lines. NP is living and working within these communities to resolve conflict and reduce tension in order to facilitate development in this beautiful but war-torn part of East Africa.

In mid-July the NPSD team was informed that tension was building between the Moru and Mundari communities of the Kediba region. The Moro people are predominantly settled agriculturalists who keep small numbers of cows. Their Mundari neighbours are semi-nomadic pastoralists who keep large herds of cattle. Both communities are closely linked, and share the market in Kediba village. This market is an important source of food for the Mundari, who do not cultivate, and of income for the Moro. In recent weeks Mundari youths have raided up to 378 head of Moro cattle, and tensions came to a head in late July when 150 were taken at one time. In the process several people were injured and two children were taken along with the cattle. The government agents in the area informed the community that if they entered into conflict, the army would be deployed to settle the situation using force.

In response to the raid the Moro people armed themselves with bows and poison-tipped arrows and were preparing to cross over into Mundari land to retrieve their cattle. Several local-government figures contacted NP’s Mundri-based team and asked them to intervene in a last-minute attempt to address the situation non-violently before the army was deployed. As a result of the years of war waged in Western Equatoria the transport infrastructure is extremely bad, particularly during the rainy season. Nevertheless, five of NP’s unarmed civilian peacekeepers travelled for hours through the driving rain along unmade roads. Eventually conditions forced them to abandon their vehicle and proceed on motorbike. A video of part of their journey can be seen here.

In an agreement mediated by NP’s peacekeepers, the Paramount Chiefs and elders of both communities agreed to meet to discuss a peaceful resolution to the conflict. A church half way between the two communities was designated as the meeting point, and representatives from both sides gathered there.

Following a long and difficult discussion requiring sustained input and support from NP’s team, a resolution was reached. The Mundari Paramount Chief and elders agreed to oversee the return of the raided cattle, and with the guidance of the NP team, both sides undertook to form a joint Peace Committee to continue the dialogue process. 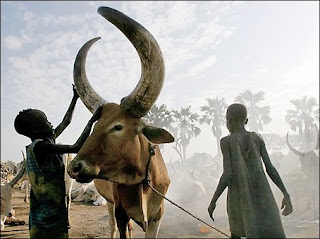 Both communities were extremely relieved to have avoided a conflict which could have led to widespread loss of life and the deployment of the army in a region which is clinging to a finely balanced peace. The Moro Paramount Chief thanked NP for its rapid and effective intervention and said, “if the NP team from Mundri had not come we would have killed each other, but God brought them in time and we were able to settle things with the Mundari peacefully. We think now that God is truly watching over us, and we encourage strong relations between NP and our society. Please don’t leave us alone again. In fact, it would be better if your office was moved from Mundri to Kediba!” Following the successful demonstration of NP’s community-based conflict resolution process the SPLM Secretary for Kediba Payam (region) said, “NP will be of great help because a peace building and reconciliation committee will be formed and people will be trained to find peace themselves.”

From the Nonviolent Peaceforce enews, July 2010
Posted by Carl Kline at 8:46 PM