A Bug in Your Ear 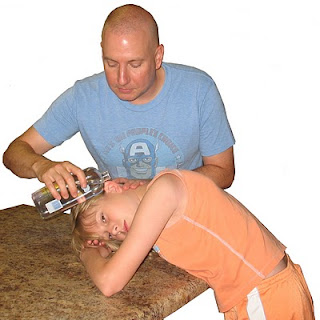 I've seen it happen twice. Once it was in India. We were sleeping on the ground, on thin bamboo mats. I was awakened in the early morning hours by my friend. He was beside himself. He wasn't able to walk in a balanced fashion but he couldn't stay still. He was in constant motion as if he had been wound up tight and was spiraling out of control. He kept sticking his finger in his ear and banging on the side of his head. An ant had crawled in, and apparently, couldn't or wouldn't get out. My friend had a bug in his ear!

On a second occasion, it happened around the campfire. An insect of some kind flew into the ear of another. I recognized the movements as he did a dance similar to my Indian friend. Fortunately, I had learned from the first experience a potential remedy. In the first instance we had drowned the ant with water. It worked. It worked the second time as well.

Ever since, I refuse to use the phrase, "I want to put a bug in your ear." I know what the experience does to someone. It makes them crazy.

With each passing day, more and more people seem interested in putting bugs in our ears. In the U.S., they call it "spin". You take any subject and give it a "spin" that puts you and your interests in the best possible light. It makes absolutely no difference what the truth is. It may be a bald-faced lie. You simply want to get the bug in people's ears. It happens in politics, in business, in all our institutions.

So British Petroleum can say their letters stand for "Beyond Petroleum." And the White House Press Secretary can get in serious trouble for failing to "spin" the fall elections, admitting the Democrats may be in trouble. The bugs are driving people crazy. There are those who recognize "spin" and are being driven crazy by the manipulation and falsification of the facts. And there are those that are getting crazy with the lies, believing them to be true. When Truth loses its value, and "spin" abounds, nothing and no-one is ultimately believable; not the politician, the President, the Pope, the parent, the physician.

Gandhi said, "Hundreds of tons of earth and stone have to be excavated by means of hard labour before even one diamond is discovered. Do we give even a fraction of this labour to the removal of the rubble of untruth and the search for the diamond of Truth?"

For me, I have to try and be disciplined. When the "spin" coincides with my point of view, do I repeat it without verification? Do I add or subtract a bit here and there, perhaps exaggerate a bit? Do I have my own "spin," planting my own bugs in the ears of others? I know bugs don't play well in human ears. So I'll do my best to limit the craziness I cause. 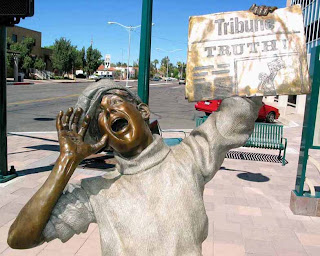