Where the Book Is the Sword Is Not 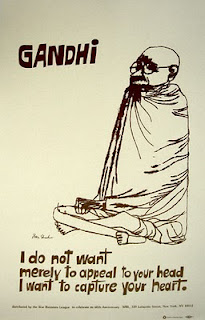 Long ago, when I first decided to become a rabbi, my mother sent me a simple white card with a pen and ink drawing by Ben Shahn illustrating the rabbinic teaching, where the sword is the book is not, and where the book is the sword is not. That card continues to offer its finely penned wisdom from where it rests upon a shelf in my study, surrounded by books.

Learning for its own sake, Torah Lishma, is meant to sensitize, to create a world of discourse wherein debate is for the sake of Heaven and the sword is not. Rabbi Meir says: One who engages in the learning of Torah for its own sake merits many things…. Rabbi Meir continues, saying that the entire world benefits through the merit of such a student. Torah is meant to incline one toward good deeds in the world. The world benefits because the study of Torah is complete only when learning leads to doing, and because learning is meant to soften the heart and calm the soul. Called a lover of God and a lover of humanity, one who learns Torah for its own sake, imbued by the spirit of holy words, can help to make the world a more gentle and peaceful place to be. Such is the pure ideal of learning in Jewish life. Encountering God’s word through dialog with each other, knowing the engagement of heart and mind as the miracle of life itself, how can we then go forth from the presence of the book and harm another of God’s creatures?

Tragically, in the study halls of some of our people the book becomes the sword, a source of division and strife. Such is the danger when the holy books of other faiths, as well, are studied in fundamentalist settings, narrowing God’s encompassing embrace to include only one’s own. In the Torah portion of Korach (Numbers 16-18), Korach in his own way uses Torah to divide. Seeking to wrest power from Moses, the rabbis present Korach as using Torah to challenge and embarrass Moses, asking questions that if asked with different purpose and spirit would be quite reasonable. Citing the requirement to have one blue thread among the tzitzit, the fringes, of a prayer shawl, Korach asks Moses if making the entire prayer shawl all of blue would not exempt one from the blue thread. He then responds sarcastically to Moses’ affirmation of the commandment as given in the Torah, saying, a prayer shawl entirely of blue does not fulfill the commandment, but four threads do fulfill it? Similarly, he asks if a house filled with books would not exempt one from placing a mezuzah. To Moses calm affirmation of the commandment of mezuzah, Korach again responds with sarcasm, the entire Torah of two hundred and seventy-five portions in it does not exempt a house from mezuzah, but two paragraphs that are in the mezuzah are sufficient? In the way of using Torah, the book, to divide, the rabbis said of Korach, p’lig al shalom/he contends against peace. The Slonimer rebbe adds that his contention is also against God, against the Sabbath, and against Torah, each of which is called Shalom, for of Torah, as we sing when returning it to the holy ark, kol n’tivoteha shalom/all her paths are peace. 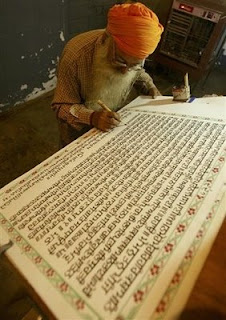 At a time when the world was filled with darkness, in the tents of Jacob there was light. From the dwelling places of Israel the light of learning shined more brightly than the glint of foreign light upon cold steel. For us, the book was and the sword was not. Before the printing press, a quill in the hand of scribes became the mightier instrument, entrusting knowledge to the page, transmitting the sacred, insuring survival. A member of my congregation in Victoria, British Columbia, whose father had collected antique Judaica, gave a precious gift to me once. It resides now as a treasure in a specially constructed archival box. A small, ever so fragile volume, it is a handwritten six-hundred-year old book. Written in Italy before the printing press, the fifteenth century volume contains selected verses from each week’s Torah portion and accompanying selections of commentary. On the age-stained page of charred edges that begins the portion of Korach, the humble scribe of fine hand and forgotten name records a teaching that the letters that spell Korach stand for bow, lance, spear, and sword. Seeking power, the way of Korach is violence and these are his tools. I associate this little volume, representing for me the triumph of the book, with the portion of Korach. For all of its fragility, in its perseverance and longevity, the book itself becomes its own prayer and ours that someday, in the manner of our living and learning, the entire world will become a place in which the book is and the sword is not.

Rabbi Victor H. Reinstein
Posted by Carl Kline at 10:00 AM