We Who Believe in Freedom Cannot Rest 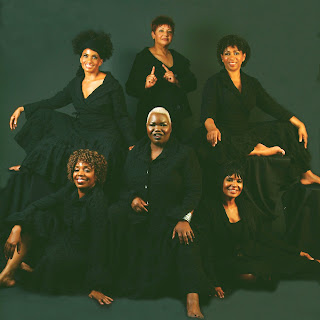 One of the most inspiring vocal groups I've ever heard is Sweet Honey in the Rock. It's my joy to share with you this video of "Ella’s Song," a piece composed by the group's founder, Bernice Johnson Reagon (pictured left, center). After more than thirty years leading the internationally-renowned ensemble, now proudly gray-haired, Reagon is still one of its strongest voices, and every bit the rock on which its harmonies are built.

The name of this a cappella group comes from Psalm 81:16, where the wandering and hungry are reassured that they will be sustained; that even when all hope seems lost, honey will flow out of rock and give them life. Says the group's website, "Honey–an ancient substance, sweet and nurturing. Rock–an elemental strength, enduring the winds of time. The metaphor of sweet honey in the rock captures completely these African American women whose repertoire is steeped in the sacred music of the Black church, the clarion calls of the civil rights movement, and songs of the struggle for justice everywhere."

The metaphor of "sweet honey in the rock" also captures completely, I believe, the spirit required of us who join these women in the long struggle not only for justice, but also for peace, for freedom with dignity, for human rights, and for the welfare of the earth and its manifold creatures.

Reagon composed "Ella's Song," the piece you're about to see performed, in tribute to Ella Baker (1903-1986, pictured right). As Reagon explains, t

he lyrics are the words of Baker herself, who, while largely unknown, was a powerful figure in the Civil Rights struggle. With Martin Luther King, Jr., she co-founded the Southern Christian Leadership Conference (SCLC) and served as its executive director. She also helped young people create the Student Non-Violent Coordinating Committee (SNCC). Working largely behind the scenes, she was steadfast, and never sought recognition for her contributions to the struggle. She was, in a phrase, "sweet honey in the rock."

In this 201o performance Reagon and her group join with the VocalEssence Chorus in Saint Paul, Minnesota, to create a stirring rendition of "Ella's Song." Here are the lyrics, if you'd like to follow (or sing, or clap, or dance) along:

That which touches me most is that I had the chance to work with people
Passing on to others that which was passed on to me
To me young people come first, they have the courage where we fail
And if I can I'll shed some light as they carry us through the gale (Refrain)

Struggling myself don’t mean a whole lot, I've come to realize
That teaching others to stand and fight is the only way the struggle survives
I’m a woman who speaks in a voice and I must be heard
At times I can be quite difficult, I’ll bow to no man’s word (Refrain)

(Note: If you're unable to see the viewer below, click here to watch the video.)