Of Birds and Barter 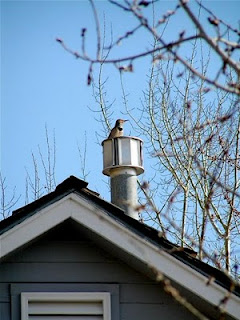 We live in a home built in 1890. It is well built, but it's easy to tell it's an old home. It has settled. Nothing is square. Marbles run across the floor to the wall. Doors are not tight. Floors creak. It's drafty in the winter ... and fuel is expensive. Years ago, we invested in a wood burning fireplace. We thought it would be a supplemental source of heat, besides, wood was cheap. A friend and I would scour his rural countryside looking for downed trees farmers wanted cleared. Then we split the result of our labors. He heated his whole home with wood, in two free standing stoves.

Our stove is cast iron. It's free standing in our family room. The stove pipe goes through a second floor alcove, through the roof and because of overhanging tree branches, goes another fifteen feet into the air where it is capped by a rain hat. When it was first installed, the rain hat had a screen in it that kept birds or other creatures from getting into the pipe. But alas, over time, it was perhaps pecked and pushed out of place and birds in the stove pipe became a common occurrence.

Because the pipe went so far above the roof line, it was impossible to approach the problem with a ladder. And the chimney was not strong enough to support a leaning body anyway. So we sought out chimney cleaners with a cherry picker (the trucks with hydraulic lifts and buckets to hold a worker). Only one was available, some fifty miles away, and after a look from the street, this operator ignored my follow up calls.

All the time, birds are coming down the pipe. Till today, I'd estimate the count at 50 to 60. We developed a routine. As soon as we heard one in the stove pipe, we'd open the flue. Then we had to wait till it would drop down into the fireplace. Sometimes this took hours, even days, even though we might try to draw it down with light or food or water. Once the bird was down, we could close all the blinds, close all the interior doors but open the outside door, turn on the lights going to the open door, open the fireplace doors, and hope the bird would fly toward the light and freedom. Most of the time it worked.

Sometimes the bird was confused and would crawl up behind a window blind, or fly into another of the attached and open rooms. Sometimes it wanted to sit on the overhead fan for a while. Sometimes it never flew out, because it was too afraid, or because it was dead. Twice, when we were away on vacation, we came home to tragedy. One bird found a way out of the fireplace to its death under our bed. Another produced blue bottle flies in the fireplace that kept us busy for days till we discovered the corpse.

The routine got old. Some days we would have two, even three birds, one after the other. It was like they were telling each other about this dangerous but exhilarating adventure every bird must try once in a lifetime. I was reaching the point where I found it difficult to value bird life, at least the ones in our chimney.

A few days ago I noticed a neighbor across the street in a cherry picker doing some repair on his roof line. Talking with his wife, I discovered he had purchased an old truck from the city so they could paint and repair their home, higher and larger than ours. After he came down in the bucket, he came across the street with me to assess positioning the lift so we could fix our rain cap. Last night we fixed it. Birds should be safe sitting on our chimney and we should be able to forget the routine. Reading this morning about the extinction of one more bird species, the Alaotra Grebe, I vowed to renew my commitment to all feathered friends. 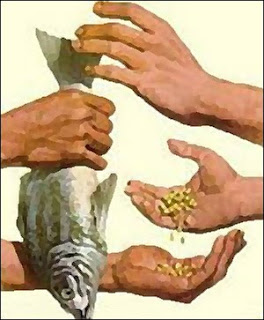 I've been reading Soil and Soul: People Versus Corporate Power by Alastair McIntosh. He writes of life growing up in the Hebrides. It was a time of neighbor helping neighbor. If you had eggs but no fish, you traded with a neighbor who had fish; and if you didn't have either, people knew it and cared, and you got both eggs and fish. It used to be like that here, too. Now, everything has a money price and corporations are people, too.

As we finished the job, I said to my neighbor, "I owe you one." He smiled and said, "we did good." He knows I owe him. He'll collect, when the time is ripe and he needs help. Or, the rhubarb is ripe and the pies are sweet! 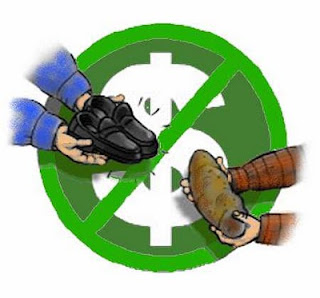