My wife and I just returned from a trip West. We only had a vague plan and time frame. We ended up doing a loop through North Dakota, Montana, Wyoming and the Black Hills of South Dakota. In the loop, besides the Black Hills, we encountered the ND badlands in Theodore Roosevelt National Park, the wonders of Yellowstone Park, and the Absaroka and Big Horn Mountains.

We were impressed with all of the park lands and grateful for the wisdom that keeps them public lands and available to all. But it was the geology and origins of Yellowstone that took my breath away. Here's a spot in the planet where the ground one walks on is only a few short miles from the hot molten material of the earths core. The yellowstone area is the result of three volcanic eruptions of 2 million, 1.3 million and 640,000 years ago. The last was likely 2,000 times more powerful than the 1980 Mount Saint Helens explosion. It resulted in some of the most awesome formations I have ever seen. There were spots along the canyon of the Shoshone River where I thought I was looking back into a very dim pre-history. The stone formations, made of volcanic rock, ash and clay, and weathered by years of water and wind, were absolutely the most ancient earth elements imaginable. At one point, standing by the river and listening to its urgent flow, I thought I heard the elemental sound of the ages, visually absorbing the most elemental sight I had ever seen. 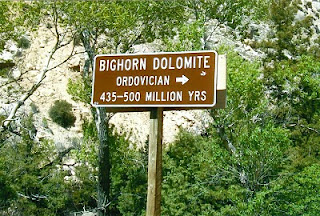 Gandhi said haste was violence. Someone questioned him about this, challenged him actually, since Gandhi encouraged people to learn to spin quickly. Gandhi responded by distinguishing between "haste" and "speed." Haste has that element of being driven by time and being out of control. With haste there is too much focus on the future and too little on the present. With haste there is a willingness to risk relationship to others and to the earth (witness BP shortcuts on safety to get the oil profits flowing).

Ramchandra Gandhi writes a wonderful little essay in his book I and Thou called "Speed Is Not the End of Life." He writes about the Mahatma who walked. He walks "up the steps of the Viceroy's palace and extracts from Churchill the 'half-naked fakir' sneer - motorised, over clothed, overfed, one-track, delinquint modern civilization's deep fear and hatred of the all-directioned-ness of meandering, looking, loving, challenging, be-ing." 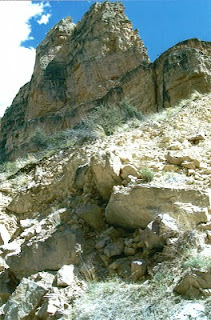 My be-ing was renewed by just looking at and loving the timelessness of those mountains and rivers. In them was wisdom our indigenous brothers and sisters have known for centuries. Only in recent times has that wisdom been erased from our consciousness. But a way of nonviolence, a way of walking and looking and respecting and considering and loving and caring and meandering, like water, will out. Such values are as timeless as the earth elements that teach them.