The village of Billadi in India, is about 40km away from Raipur, the capital of Chattisgarh. About 20 years ago, a group of 35 women occupied 15 acres of state land for their livelihood through a long non-violent struggle. Since then, the women have been trying to get the legal lease of the occupied land. They have also worked on developing the land for agriculture purposes. A women's society in the name of Mahila Mandal, Billadi, was registered in 1991 (under the society registration act, 1973) and they continue their struggle under this banner.

Initially, these women faced problems in coming out of their homes. But through gradual and peaceful persuasion, they were able to convince their family members to allow them to do so. Now Billadi's women are free to go anywhere without any obstruction.

This is a story of some of the simple but strong initiatives taken by these ordinary women to protect their land and secure their rights through peaceful means. 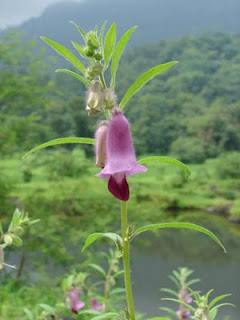 In 2002, the women cultivated millet and sesamum on a portion of this 15 acre land. But Billadi's Surpanch (head man) sold these crops for Rs. 3000 without giving them anything in return. All the women revolted peacefully against this. Now the Surpanch also realizes that the women are aware of their rights and he cannot exploit them in this way.

In 2004, Surpanch of Billadi sold some portion of the occupied land (about 5 acre) for Rs. 20 thousand to Sri Narendra Sharma, a retired army man. This prompted the women to write an application to Police Sub-Inspector, Tilda, on 28 January 2004. Narendra Sharma started cultivating paddy on this piece of land and put his nameplate "Sharma Farm House'. One day, when it was raining heavily, these women simply pulled off this nameplate and threw it away. They went back to their land and started cultivating sesamum in place of his rice.

Now the Mahila Mandal spends about Rs.10000 per year to cultivate crops, but due to the barrenness of the land and its distant location they do not get much profit. Most of the neighbors let their cattle loose to graze on the crops planted by them because there is no fencing in this land and the women cannot take care of it day and night. The women have also written an application to the president of the district panchayat, against this grazing. The brave women have even faced trial in Tilda court for six months due to a notice by the Revenue Department. In order to get the lease of the occupied land, they organized a stop vehicle movement (Chhaka Jam) on the Tilda-Simga road. It was also the women of Billadi's Mahila Mandal who struggled hard to close the local wine shop.

Recently, when Police arrested a villager named Jethu Rawat of village Oduan in a case of small infighting, the wife of Jethu Rawat went to Motinbai, the president of Mahila Mandal and then both went to the Police Station accompanied by four or five other villagers. After talking with the inspector they were able to get Jethu Rawat released on bail. In this whole process, no bribe of even a single rupee was given to the police.

A Sarpanch of a nearby village, Udera, had built his own house on one acre of government land and when some of the poor landless women tried to plough the empty land he threatened to report them to the police. Motin Bai and Roshani Bai of the Mahila Mandal went to Udera to support the women to plough and cultivate sesamum on about 2.5 acres of land. The production of sesamum was good which helped the women of Udera in their livelihood.

One day, when Motin Bai went to buy sugar from the ration shop, she was told that only 2.5 kg of sugar would be given as against 6 kg. But Motin Bai had seen the shopkeeper selling 20 kg sugar to 3 persons. Angry, Motin Bai asked for a key and lock and locked his shop and said that there was no need of a ration shop in the village. The shopkeeper complained to his boss at the Block Development office. When the boss came to Billadi and asked Motin Bai the reason for her action, she promptly answered him and the shopkeeper was told not to repeat it again.

In this way, women of Mahila Mandal have not only helped their own villagers but also supported the neighborhood villagers at the time of their need. At present, the Mahila Mundal is still continuing its struggle against a Power Plant, besides the demand for the lease of the captured land.

The Mahila Mandal has earned a reputation among the district and local government officials and they pay attention to the issues raised by women in favor of common people. Cesci Centre, Madurai (Tamilnadu) awarded "Maya Koyne Award" to Mahila Mandal, Billadi in 2003. The struggle for land by Billadi's women is praiseworthy. Billadi can be mentioned among those villages of India which are known for women's struggle for land and livelihood. Due to mutual understanding, non-violent struggle and right leadership of Mahila Mandal, the women have got the possession of the land. The women are still saying "Our feet are in the grave but we have firm faith that our children will use this land for their livelihood with their full legal rights." 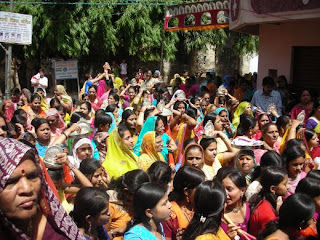