"Beyond America": A Summons to America 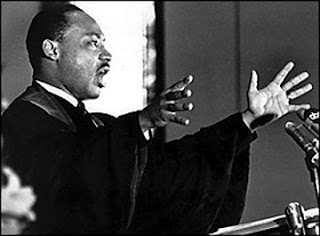 On April 4, 1967, the Rev. Dr. Martin Luther King, Jr., delivered his "Beyond Vietnam" speech at the Riverside Church of New York. A year later to the day, he was assassinated in Memphis, Tennessee.

During the last year of his life, King suffered widespread condemnation and was abandoned by many supporters, white and black, because of his opposition to the Vietnam War. Despite the rejection and the risks, he never stopped summoning America to a "radical revolution of values." He never stopped challenging the nation he loved to "come home" from the far country of "racism, militarism and economic exploitation."

Today his call is ours to answer.

In the presentation offered below, which runs nearly a half-hour, King preaches "Beyond Vietnam" at Ebenezer Baptist Church in Atlanta on April 30, 1967. (The award-winning recording was edited for length.) I created this piece for a commemoration of King's death being held tomorrow in Brookings, SD. King's words, in my view, are as true today as they were when first spoken--perhaps even more so, because of the interweaving of history and contemporary events. King's passion, inspired by both love for and disappointment in his nation, resonates deeply with my own spirit. Perhaps it will with yours as well.

You and I have much work to do, my friends. Let's keep on keepin' on.

(Note: If for some reason you can't see the viewer below, you may watch the video at Vimeo.com by clicking here.)