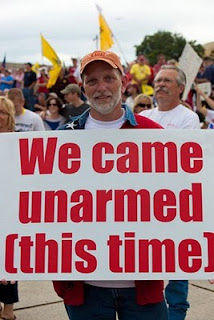 Last night, I heard it again. I've lost track of all the people who have said it; the number of times I've heard it. The response came from the woman who heads the Tea Party movement as she appeared on the Dave Letterman show. She looked like a neighborly matron, maybe a retired fourth grade teacher. Her responses to Lettermans' questions were conservative, but reasonable. She seemed good humored, enjoying a laugh with the TV host on several occasions. And then she said it! In response to a question about how the Tea Party felt about the lives and treasure wasted in Iraq she said, "I'd rather fight them there than here." This from a woman who later claimed she was a pacifist.

I'm trying to understand the thinking of a person who claims to be a pacifist but is OK with her government destroying a country, killing hundreds of thousands of its people and making refugees out of many more, in order to keep the "war on terror" from coming home. I always wonder when I hear people say this stock response, "do they realize the moral dimensions of what they are saying?"

I heard earlier in the week about how the human being is wired for revenge and for forgiveness. Both!! And I wonder if many in the U.S. aren't still seeking the revenge for 9/11 that may never be satisfied. So many who suffer go to their graves seeking the deaths of those who made them suffer. One often sees it in the dynamics surrounding the death penalty and certainly in the larger Holy War struggle encompassing much of our planet. But the positive side of the revenge wire is it's about fairness, about justice. It's the motivation for concepts like eye for eye and tooth for tooth. It underlies blood feuds and Holy Wars. And the question then becomes, how many "other" lives must be taken to redeem 3,000 american lives.

If we begin to understand revenge and forgiveness as Gandhi did, we would begin to distinguish between our more beastly nature and the way of the true human. For him, we need not succumb to our beastly nature. Nor do we ignore injustice. Gandhi was convinced we could rise to our higher nature, to the level of self suffering in the cause of justice and nonviolence. In doing so, we illustrate the strength and courage it takes to be a satyagrahi. 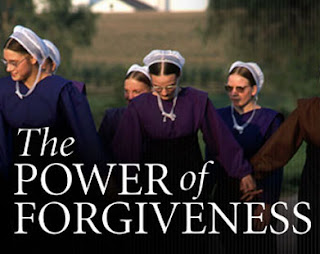 Ask me about this wonderful film.