Limping Toward the Dawn 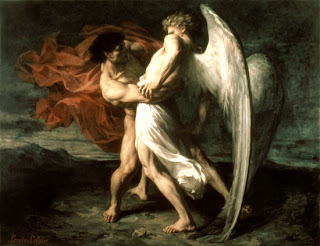 I feel hollow in my soul, like the weakness that comes when emptied of tears after a good cry; like the hollow in Jacob’s thigh where touched by the angel with whom he wrestled in the night.

The words would rather not come, born of feelings too familiar, wanting to cry enough, enough; yes, we thought we could, and now trying not to give play to melancholy and disappointment in the irony of old ways packaged as new; but how to ward off despair without speaking its name?

War is its name, the call to violence trapping us again and again in its ancient thrall. Where now the imagination and the hope that shined so bright, the courage manifest before with eloquence and purpose, now to the generals giving sway?

Vayishlach, and Jacob sent… scouts out ahead to gauge the nature of his brother’s coming; and Esau now approaching, twenty years of pent-up rage for the stolen birthright and its blessing, with four-hundred armed men the scouts said; and Jacob was very much afraid and was distressed; each word teaches something different, Jacob was afraid that he might be killed and was distressed that he might kill others. To kill others it appears he had resort to arms, and the hands to hold them if he would send his young to the slaughter; when we are as afraid to kill as to be killed – is that when we shall find a new way?

Jacob wrestled through the night where the Yabok river flows, with the angel meant to be his brother -- or himself, waiting to know the nature of his crossing over and toward what, as a man of peace or as a man of war; and the angel touched him on his thigh;

Wounded in the struggle and limping toward the dawn, only then did he become shalem/whole, crossing over to encounter the anger of his brother; not with battle, nor the din of steel to be heard, only the sound of two brothers upon each other’s shoulder crying.

For his wrestling Jacob came to be Yisra’el, one who wrestles with God and people and perseveres; so the name is handed to the generations that we too might wrestle through the night, until with break of day we find another way.

Rabbi Victor H. Reinstein
Posted by Carl Kline at 11:16 AM