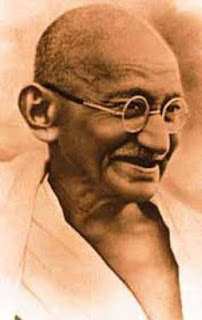 As I sit at my desk and write this, Gandhi is looking over my shoulder. He watches the keyboard as I type this blog. Mark McGinnis, a South Dakota artist , has rendered the Mahatmas' profile in black and white. It hangs on my wall. Mark has done other work that lead an observer to reflect on peace and justice themes. During the madness of the nuclear arms race, he did an installation representing missile fields that was visually stunning and it forced one to recognize the utter insanity of the reality we had constructed.

When I was in Mexico last fall, I was introduced to the music of Lila Downs. Lila is Mexican/US American. Born in Mexico, she lived in California and Minnesota. She brings a multicultural perspective to her work and her music touches the heart and fires the spirit. She knows how to move her listeners toward liberty and justice.

Yesterday morning I was inspired by a sonnet of Shakespeare. it filled me up with the force of soul stuff. It made me recognize the infinite power of love, even in the face of all the friends and neighbors of death. 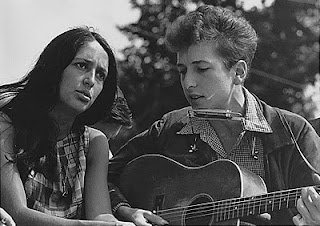 I'm reminded today of how important artists were to the movement to stop the war in Vietnam. Musicians seemed to lead the way. They gave sustenance to people who were groping for some kind of spiritual uplift in a dark and dangerous time. They provided the soul force necessary to stare down political failures and return to the struggle, again and again and again.

Today, for the third week in a row, some of us went and returned from the office of our congressperson, fifty miles south of our homes. We've been going to take our message, "healthcare not warfare." After our first visit, our representative declared she would not vote for health care reform. Last week, after our second visit, she voted against bringing the troops home from Afghanistan by the end of 2010. We expect her to vote this week against health care reform and are quite certain she will vote for another war supplemental, this time for $33 billion. Add that to the $711 billion she's already allocated for the war effort and you have more than enough to begin a quality federal health care system for all. It's frustrating. It's tedious. It's time and energy consuming. It's sad and depressing.

I remember listening to an Indian poet, his name long forgotten, speak about how the Spirit comes to all of us. We just need to have our pipes clean and our channels open so it can move us ... and move through us. Matthew Fox, the Dominican priest, who has given us the Center for Creation Centered Spirituality, believes much the same thing. The creative Spirit is the Eternal Spirit. It is the force that gives poets inspiration, artists visions, musicians compositions, potters form. And these gifted persons in turn are able to give the prophets and seekers after peace and justice the sustenance they need to keep at the task, trying to build the beloved community in the midst of a world at war.

A simple song can silence a crowd. A national anthem can invite a tear. A hymn for humanity can birth a movement. Move us artists. Move us!