Its meaning refracted through the lens of personal encounter, I am drawn to a particular verse at the beginning of the Book of Exodus. In the midst of a packed narrative, it might not seem to be a verse that would stand out. Jacob and Joseph have died, a new king has arisen over Egypt, the enslavement has begun. Moses has fled to Midian after killing a taskmaster who was beating a Jewish slave. Having married Tzipporah, daughter of Yitro, Moses is tending his father-in-law’s sheep. One day while following the flock, God calls to Moshe from out of the fire of a bush that burned but was not consumed. Moses turns toward this amazing sight, but is then stopped in his approach. God tells him, Do not step here! Take your shoes off your feet, for the place upon which you are standing is holy ground/admat kodesh hu. 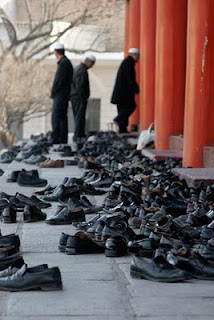 The image of shoes removed before approaching God is rich and vivid in my mind this week. Beneath the great vaulted arches of Muslim prayer space, shoes removed before approaching, the place of prayer becoming holy ground, worshippers prostrate, shoulder to shoulder upon the carpeted ground. Recently, nearly fifty rabbis, imams and Muslim community leaders gathered at the new mosque at Roxbury Crossing as part of a program called “Building Bridges through Learning.” It was the third such gathering that we have had, engaging with each other to study sacred texts from both traditions, to learn about each other as people, to pray and to eat together.

In each other’s presence, working as partners, the goal is to create a new reality in which it is commonplace for Jews and Muslims to learn together and to share with each other the essence of who we are. Building bridges through learning, the goal is to create common ground, truly holy ground, upon which we can come to know each other. With the hospitality of Abraham, the rabbis were welcomed to the mosque as cousins. As we came together, sharing personal stories in small groups, we remembered that there is a natural bridge between Jews and Muslims that is too often forgotten today. Both peoples are a people of the book, ah’l al kitab/am ha’sefer. Through the book, Quran and Torah, there comes to be a covenant that joins people and God and people and people. That was the focus of our text study, “Covenant in Islam and Judaism.” Learning about the meaning of covenant in each tradition, we sought opportunity to create a covenant of understanding among ourselves. The learning in which we engaged is meant to transcend the texts that lay before us. With covenant comes responsibility. Our learning is hardly meant to be academic, but to nurture a sense of covenantal responsibility to building bridges between our communities through openness, respect, and dialogue.

While on a tour of the magnificent building, we had the opportunity to visit a first grade classroom, the beginning of what will be a Muslim day school. Thrilled to have visitors, the children giggled and pointed. They wanted to know about the little “hats” many of us wore. Before we could answer, their teacher, who wore a headscarf, told her students that it is called a yarmulke, her use of the Yiddish word bringing such warmth to the moment. As various answers came from the rabbis, I told the children that we wear a yarmulke when we are in a very special place and with very special people.

As we left the classroom, the call to prayer filled the building and we made our way to the great prayer hall. The time of the Muslim noon prayer, called Thohr, came at the same time as the earliest time for our own afternoon prayer, mincha. We removed our shoes and entered the sacred space of shared prayer. First the Muslims prayed, the presence of Jews among them as amen to their prayers. And then we prayed, the presence of Muslims among us as amen to our prayers. Arabic and Hebrew floated upward together, echoing in the domed ceiling high above us, rising higher yet. And God smiled. 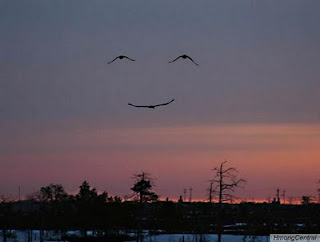 Rabbi Victor H. Reinstein
Posted by Carl Kline at 9:20 AM