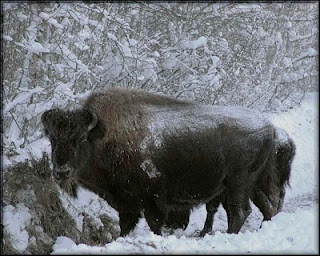 Several years ago we experienced a difficult winter here on the high plains of South Dakota. I remember reading about all the thousands of cattle, west of the Missouri River, that had been lost. There were also news reports of bison herds roaming the prairie. The snow drifts went over the fences and allowed the bison to roam free.

The following summer I was on the Cheyenne River Reservation. You approach reservation land as you cross the bridge over the Missouri River on South Dakota highway 212. Shortly after the bridge, you see high fences that trace the boundary of the tribal bison herd. I met and talked with the person who managed the herd. I asked about the winter storms, about all the cattle that had died, and about tribal bison losses to the snow and cold. He smiled and said they lost one animal from their herd. The bison walked over the drifted fence out onto the bridge, fell onto the frozen river, and died. Even so, they were able to take the meat and hide.

I was awed as this manager of the herd talked about the animals. His knowledge came from observation. It wasn't unusual for him to spend hours watching the animals, the interaction between them, the dynamics of family life, the patterns of communication. He knew bison, intimately and up close. It's one of the reasons the tribe had purchased a slaughterhouse, contained in an extended trailer. When the herd needed to be culled to meet tribal needs, a process was in place. With the trailer in the pasture, and an animal selected for slaughter, the bison was killed with one shot and dressed on the spot. There was no opportunity for the spirit of the creature and its meat to be poisoned by pain and suffering. The taking was quick and efficient.

I'm thinking about that experience having read an article in The Sun on the ethics of hunting. David Petersen www.davidpetersenbooks.com is being interviewed on the ethics of killing animals for food. He castigates the Outdoor Channel and similar TV fare for what he calls "horn porn." He has no use for cheater technologies, for baiting and penning your prey, for ATVs, for trophy hunting, for the NRA. He believes that hunters (not killers) respect the creature they hunt. It's best to use a bow as you have to be within several yards of the animal. You need to be observant and knowledgeable about what you are hunting and its environment. He sounds a lot like the bison manager of the Cheyenne River herd.

I struggle to be a practicing vegetarian. When I do eat fish or fowl, I know the ethical course of action is taking the life respectfully, myself. I'm grateful for teachers like tribal members and David Petersen, who extend the rationale for hunting and the challenge of doing it well. 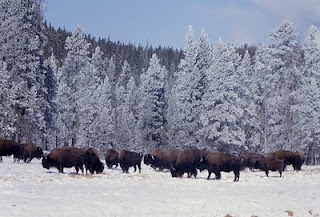