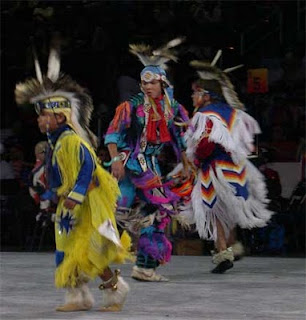 This week end is the annual wacipi at South Dakota State University. Sponsored by the campus Native American Club, the event has grown over the years. Yesterday, I counted eighteen drum groups.

This year the wacipi was preceded by an American Indian History and Culture Conference. The focus was storytelling and included several presentations, including one by Susan Power, the author of "Grass Dancer." I was in the audience Friday afternoon to hear a friend, Dr. Edward Valandra, Chair of the American Indian Studies Department at the University of South Dakota, speak about the history of Native Studies programs.

After his remarks, the schedule called for a student panel. Their task was to share their experiences of storytelling to illustrate the depth and complexity of this cultural tradition. The students took the stage and the audience waited for the session to begin. The faculty member facilitating the program seemed engrossed in a conversation with two men in the back of the hall. Eventually, they all came to the stage and the elder was introduced to offer a prayer. The elder was praying for the third mans' son, who had called his father at three o'clock that morning, with helicopter blades clapping the air in the background, to say he was leaving for Afghanistan. The elder proceeded with the prayer, in Lakota and English, for strength, for clear vision, for safety, for comfort. He said when he saw a man cry, he knew he was in serious need of prayer.

Then the father took the microphone. We learned he was a veteran of three tours in Iraq and one in Bosnia with UN forces. He said he had hardly been home from Iraq when he discovered his son was scheduled to leave for Afghanistan. And now, his son was on his way, earlier than scheduled. His father hadn't had an opportunity to do the rituals his grandfather had done with him, to make sure his son would be strong, and safe.

He talked for twenty minutes. The students sat patiently. The program facilitator sat patiently. The Native Americans in the audience sat patiently. There was some restlessness among the others, but the story was powerful and ultimately, ironic. The speaker was wearing his service jacket, with his name tag. His last name was "Wounded Knee." 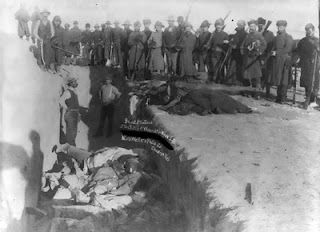 I'm aware that historically Native American communities have been culturally prepared to receive wounded warriors back into the culture. There are ceremonies that can help. There is honor given and received. And they are heard! Even when they aren't on the program. Even when they interrupt. Even when they keep others waiting, Native people patiently listen and hear the hurt.