A Different Kind of Hero

The story of Isaac is the complicated story of a complex person. The second of Israel’s male ancestors, son of Abraham and Sarah, Isaac is the most misunderstood of our ancestors. He is often portrayed as weak, as rather unremarkable in relation to his father Abraham, and his son Jacob. That he is misunderstood is less a reflection on him, than on the inability of the generations since, including our own, to see beyond a narrow mold of how we expect our heroes to be. In trying to understand Isaac, we have to try to understand our selves, (in spite of all that we want to believe has changed), in relation to still dominant social norms that measure power in relation to physical strength. Isaac is a quiet hero, a man of deep spirit, of nonviolent strength, a lover who is romantic and emotional. A tragic hero, he is also a survivor. Like all heroes, he is flawed, and therefore real. In the Book of Genesis, chapters 25-28, we encounter Isaac at the moment of transition from child and descendant to becoming also a parent and an ancestor in the unfolding of the Jewish people.

Born to elderly parents long unable to have children, Isaac is burdened with great expectations from even before he is born. He is born amidst laughter, his name Yitzchak deriving from his mother’s incredulous laughter; God has prepared laughter/’tz’chok’ for me, all who hear of this will laugh with me/’yitzchak li.’ 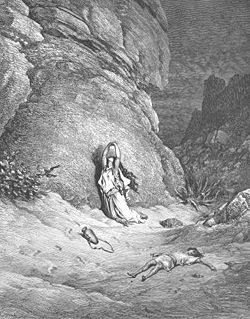 Beyond his birth, there is not to be much laughter in Isaac’s life. While yet a child, his brother Yishma’el with mother Hagar are sent away. Whatever elaborate reasons are given for this, reasons always beyond the simple meaning of the text, how could this not have affected Isaac throughout his life?

The signature event that defines Isaac’s life is the Akedah, his being bound on the altar intended as a sacrifice in response to his father’s hearing of God’s call. It is the trauma that defines and haunts his life. In relation to Isaac, God is called by the name Pachad Yitzchak/Fear of Isaac. And how is a son to call his father, having seen the knife poised above him? Perhaps the charge of passivity that follows Isaac through the generations is rooted here. Why doesn’t he flee from his father’s zeal? In “Story of Isaac,” plaintive poem and song, Leonard Cohen sets the scene in which to ask, faith or fear, dumbstruck or awestruck, or something deeper that we cannot know? “Then my father built an altar, he looked once behind his shoulder, he knew I would not hide.” Strength rising from a well deep within, Isaac gently stands his ground and faces down through the generations all who would raise a hand to kill in God’s name.

Isaac does not return from the mountain with his father. Not seeing her son, some say that Sarah died from shock, overcome by a parent’s worst nightmare. We are told that Isaac went to the south, to the Well of The-Living-One-Who-Sees-Me/B’er Lachai Ro’i, it is the well where Hagar and Yishma’el encountered God in their time of desperation and despair. If Isaac sought healing in going to the well and to the south, he also brought healing. Coming to the place where Hagar and Yishma’el dwelled, Isaac follows a path of reconciliation. Reaching beyond estrangement and transcending his own trauma, it seems that Isaac sought to reweave the torn fabric of his family. Soon after he returns from the south, perhaps having acted as marriage-maker, his father Abraham marries Ketura, whom the rabbis say is none other than Hagar. And while Isaac is in the south, Abraham seeks to arrange a marriage for his son, living now with the hope of Isaac’s return. Each hopes that the other will know love’s healing for all that has been.

Seeking solace in nature, as was his wont commentary suggests, “Isaac went out to meditate in the field at dusk.” In that moment, so full with spiritual and romantic possibility, Isaac lifts up his eyes and sees his bashert/intended one coming toward him upon a camel. With sensitivity befitting Isaac’s gentle soul, the Torah says, And Isaac brought her into the tent of his mother Sarah. He married Rebecca, she became his wife, and he loved her, and only then was Isaac comforted for his mother.

Whether from the experience of grief and trauma, or the inherent nature of his soul, Isaac is a man of peace. In his response to conflict, we see the underpinnings of nonviolence. Seeking water in the desert, Isaac’s herdsmen dug a well. We are told that the herdsmen of Gerar quarreled with Isaac’s herdsmen over the well. Naming that well Essek/Contention, Isaac told his herdsmen to move on and to dig another well. The herdsmen of Gerar also quarreled about that well, which Isaac named Sitnah/Obstruction. Moving on yet again, Isaac dug another well, and there was no quarreling. 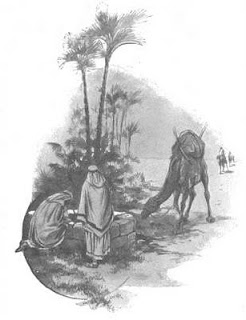 He named that well Rechovot/Spaciousness. Was Isaac passive, or was he determined? The Torah suggests the latter in saying of yet another well that Isaac dug that it continues ad hayom hazeh/until this day. While the fruits of violence are fleeting, there is longevity in the way of Isaac.

Rabbi Levi Yitzchak of Berditchev speaks of Isaac as being of the sitra d’nukvah/the feminine aspect. Beyond gender, it is the way of Isaac’s gentleness to which the Berditchever refers, to that commingling of qualities that are the masculine and feminine within each of us. The way that we see Isaac reflects the way that we see our selves. As Isaac found wholeness beyond the tragedy and trauma of his life, so may we seek the way of this noble ancestor and bring greater wholeness to ourselves and to the world around us.

Rabbi Victor H. Reinstein
Posted by Carl Kline at 10:34 AM