My brother and I were present when the hearse arrived to take my mothers' body. She had decided on cremation. The day before we sat with the funeral home director while I asked lots of questions about the cremation process. Although he didn't say so, I sensed that he didn't often get questions. How was the body prepared? What was the fuel? How hot was the fire? How did we know the ashes we received were those of my mother? And so forth.

As they wheeled her body out of her apartment, I remarked to my brother that if we were in India, we would be taking her body ourselves and preparing it for cremation on the banks of the Ganges. He nodded. I think we both felt to do it ourselves would be an adventure in relationship, and in living and dying, that would deepen our understanding of being human. 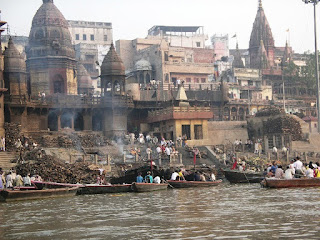 Alas, in U.S. society, to be close to death is to be somehow unclean, and afraid.

Watching the film "Food, Inc." this past week, I was reminded of three things I first observed in the Meat Lab at South Dakota State University. Slaughtering animals is methodical and efficient in the killing. It is clinical and scientifically engineered in the processing. And it is usually done by people on the fringes of the culture.

In the film, we saw a plant processing chickens from those long low chicken houses where the chickens seldom see the light of day and grow breasts so fat they can't walk. This scenario was contrasted with a farmer who processed his own chickens, free roamers on the farm, in a home made operation. Unlike the cultural norm, his closeness to death didn't detract from the desirability of the finished product. On the contrary. The mechanized, industrialized, robotized process of Tyson seemed distasteful. It required every chicken to be the same size! (I forgot to ask that question about modern day crematoriums. Do big people fit OK? Does a big body require more fuel, like it might on the banks of the Ganges? Is the cremation of a child cheaper?) 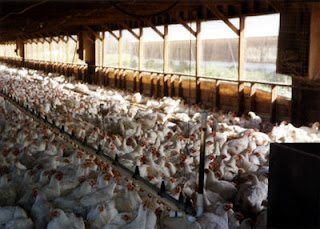 Perhaps you can tell I'm thinking these days about "distance" from death. It's not just funeral customs and our treatment of animals. I'm also thinking of the growing use by the U.S. military of drones. If you want to kill someone, anywhere in the world, just rain death on them from the skies. It's efficient. It's immediate. It's clinical and scientifically engineered. You don't have to touch it or risk anything. You can be sitting manipulating a tool half a world away.