Barking Up the Wrong Tree

I’ve been thinking about how perception shapes reality, perhaps more to the point, how perception can create a reality. A few nights ago as we pulled into the driveway at the home where we are house sitting, we were greeted by two dogs as we got out of the car. The house is in an isolated setting on the moors overlooking one of the island’s great ponds and the ocean beyond. There are no occupied houses in the immediate area. So the dogs were strangely out of place. The absence of barking and growling and bared teeth assured us that they were friendly and their wagging tails confirmed it. They were clearly out for an evening romp out of sight of their owners for awhile.

We shooed them off and went into the house, watched a DVD, showered, and went to bed. At about 1:30 AM, I awoke to the sound of dogs barking. This is where my perceptions began to construct a reality. The barking was intermittent and sounded like only one dog at first. Then a second sound, almost human - - almost crying. The adrenalin started pumping. Was there a human being prowling around outside the house? The night was darker than dark as there was a thick cloud cover over the moon. I lay rigid for awhile, trying to discern from the perceived safety of my bed exactly what the sounds meant.

The intermittent barking of the first dog was soon joined by the high pitched “yipping” of the second dog. A shift in perception again. More benign this time. Perhaps one of the dogs was caught or injured in some way and its courageous and faithful companion was barking for help. But once again I could not summon the guts to get out of bed and head out into the darkness to find out what was really going on. An injured dog could be dangerous, after all.

All night long, the barking continued, abating for a few minutes here and there and then resuming again in an increasingly familiar cadence. Finally, at 6 AM, my body yearning for sleep, it was light enough to see out into the yard. The same two dogs who greeted us on our arrival at night were still there, circling a large bush next to the driveway. A medium size yellow Lab and a smaller black one. They would stop periodically and bark up into the bush where what appeared to be a nest clung to the topmost branches, frustratingly out of reach.

At 7:30AM my husband and I decided that it was late enough in the morning to call the local dog warden. As soon as the conversation was finished, the phone rang again. A rather sheepish neighbor….”I think my dogs are at your house.” They had wandered off around noon the previous day and the neighbor feared they had fallen through the ice on the partially frozen pond. He had been out searching for them at daybreak and heard them barking. He came to retrieve them and as he and my husband escorted the dogs into the waiting car, they checked out the bush and found that the dogs had treed a large rat and had kept it in the top branches of the bush all night long. So much for our perception of the nest we were sure we had seen from the kitchen window. 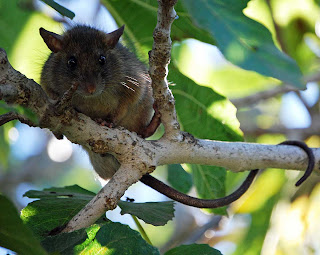 I learned a few things about my self that night. I had met the dogs before the nocturnal vigil began and I liked them. So I was able to tolerate the barking until I heard a different sound which struck fear in me and suddenly there was malevolent threat just outside the bedroom window. When I could identify that sound as the bark of the second dog, my fear level dropped way down again. When I imagined there was an injured animal out there, compassion began to rise but the feeling that I should take action was tempered with fear for my safety.

Mercifully, with the sunrise and greater visibility, the absolute humor of the night’s adventure became obvious. I wondered how often I create fearful scenarios from my perceptions, generate violent inner responses to perceived danger, remain passive in my response because of the fear I activate. In a rather benign event, my perceptions of it caused discomfort, emotional distress, fear, compassion, and then fear again. A little investigation would have relieved almost all of that and perhaps allowed me to sleep through the night.

As I listen to the news, the opinions voiced about the news, the opinions that follow the opinions, the continual narratives of negative scenarios from local crime scenes to disturbing elections to suicide bombings, I am increasingly aware that I need to be very selective about the weight I give to the perceptions of others as they tell the stories to which they are committed. It is incumbent upon me to develop a “screen” for filtering out the commentary that is shaped by someone else’s fear based perceptions. Fear often generates anger and anger often generates a violent response and a violent response is inevitably destructive. As the “powers and principalities” become increasingly skilled at manipulating the fears of human beings in order to affect election results and public policy, the cultivation of a skilled and subtle nonviolent consciousness becomes increasingly significant. My daily challenge is learning to be more mindful of how perceptions may construct a reality that is quite unreal.

After all, the frightening sounds of a malevolent trespasser or the cries of an injured animal, in reality, may only be a couple of dogs enjoying the adventure of keeping a rat trapped high in the branches of a windblown bush on the moors of a beautiful ocean wrapped island off the coast of New England.