The Home of Nonviolence 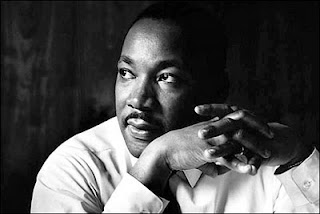 It's been my custom when traveling to India to take some small gifts along, for old friends and new. In the early years, I was asked to bring pens, as the Indian variety wasn't very reliable. Sometimes, I took books, although packing light and simply didn't allow for many. One year I took tapes of Martin Luther King, Jr. A King tape was an immediate hit.

This particular year our joint U.S./India program group was staying at a teacher training institute named for Gandhi's wife, Kasturba. I gave a King tape to an old friend and within minutes someone had produced a cassette player and all of the Indian participants were huddled around, listening intently. There was total silence and no movement till King finished speaking and even then, it was clear, the Indian participants wanted some time to reflect on and digest what they had heard.

It was surprising to me at the time that King was seemingly more revered in India than he was in his own country. You could go to a home of the poorest of the poor and they would have a picture of King on their family altar, along with Gandhi and Ganesha. At one point I thought this reverence was because King had traveled to India, wanting to understand better the country of Gandhi. But now I think differently.

Prophets aren't usually welcome in their own country. The Bible has it right. After all, King was first stabbed and later assassinated at home. Gandhi didn't die of natural causes. He too was killed, in India. The principalities and powers in a nation state are hard pressed to respond to fundamental challenges with civility. Those who are blinded by ideology, or greed, or the fruits of power seldom surrender. And those of us who reside in societies where prophets are abroad, don't always appreciate their persistent and critical voice,

Our friend Ramachandran Potti would often say, in appreciation of our joint East/West program, exploring the ideas and ideals of Gandhi, "Gandhi will come to India by way of the West." His experience was that younger people were more likely to take Gandhi seriously if Westerners were traveling to India to learn about him.

In the same way, when Nonviolent Alternatives developed a program with Lakota/Dakota people to learn more about an indigenous world view, the interest and participation of folks from India and Europe stimulated others from the U.S. to learn more about people they had been ignoring.