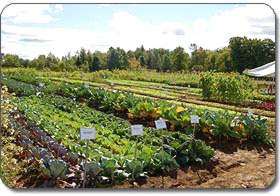 (The picture comes from High Mowing Organic Seeds in Hardwick, VT. Visit them at www.highmowingseeds.com)

A friend forwarded an inspiring video to me yesterday. The video is about the local food economy in Hardwick, Vermont. Hardwick has some people who are creating a new society in the shell of the old, a food infrastructure that's an alternative to the corporate model offered by Wal Mart. It made me think of the two legs formula of Gandhi. He believed we needed two legs to walk into a nonviolent future. One leg was satyagraha, the use of truth force to resist and challenge the violence and injustice of the present. The other leg was constructive program, creating the alternative institutions that model the new society we are working to create. 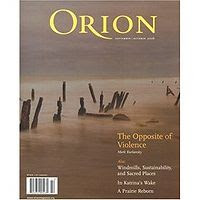 I'm convinced larger numbers of people are discovering every day that if they care about the common good they need to create new and decentralized organisms. Orion Magazine offers stories for a sustainable future in a part of the magazine called "Making Other Arrangements." Two experiments in the latest issue deserve attention. In Nelson, British Colombia, fifty some people unload a fleet of four sailboats. The boats have brought five thousand pounds of grain to members of the Kootenay Grain CSA (community supported agriculture). Some 450 families receive spelt, oats, wheat, lentils, and perhaps in the future, quinoa and chickpeas. The growers are local, a sailboat journey up the lake. The transportation is fossil fuel free. The labor is cooperative. The communal spirit is celebratory.

And in Anaktuvuk Pass, Alaska, the Cold Climate Housing Research Center is designing and building homes that reduce heating fuel consumption from about a thousand gallons a year to around one hundred twenty. The houses have sod roofs, a return to earlier construction ideas.

Gandhi believed people needed to exercise self control, self discipline and as much as possible, self sufficiency. In a culture where absentee decision makers want to control, discipline and supply us with whatever makes them the most profit, regardless of how it affects our health and well being, Gandhi's ideas make more and more sense. There are so many things we can do for ourselves, on a local level, that will make us healthier and wealthier. And did I mention, wiser?