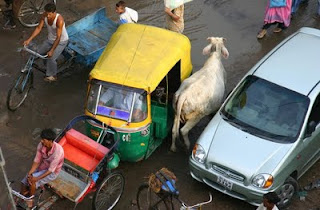 One of the programs of Nonviolent Alternatives over the years has been providing opportunities for people to experience the work of nonviolent activists in Gandhis' India. Usually, the programs range from three to four weeks long and are held in three or four different venues. Anyone interested in the program applies to participate and fills out a fairly extensive questionnaire that includes health status and special needs. One year, an applicant skipped the health part of the application.

We started the India program in Bangalore. We had only been there a couple of days when one of the participants approached me. She reported that her roommate was having severe headaches, dizziness and vision problems. All three of these symptoms were signs that she needed medical relief. She had a brain tumor. Her doctors had instructed her that should she experience such symptoms, she was to return to the U.S. and their hospital immediately. The tumor was inoperable, but by draining fluid and reducing pressure they expected to keep her alive, for, who knows how long. The young woman with the tumor hadn't told us any of this, fearful that we might not accept her for this experience of a lifetime, a lifetime she expected to be far too short.

So I talked with her. She didn't want to go back to the states. She wanted to continue the program. This experience was of the utmost importance to her. She believed that the symptoms could be managed and she wasn't afraid or anxious. She understood that we would be leaving the city for the countryside the following day and it would be difficult to get her to adequate medical care, or back to the states, once we left Bangalore. I was left in a quandary by our conversation. I didn't have a clear idea about what to think or do.

So I explained the situation to my co-leader from India, Ramachandran Potti. Potti, God rest his soul, was one of the most devout Gandhians I ever expect to know. For several years he assumed the duties of the Director of the Gandhi Peace Foundation in New Delhi. For me, he was a kindred spirit and an elder brother. We were riding in a rickshaw through the streets of Bangalore as I explained the situation to him. I told him I believed the young woman was spiritually driven, not self destructive. Potti just listened. A long silence followed. Then he said, "she should come with us. We will trust in God."

So simple and yet so profound. It speaks to me of the way of nonviolence. When it comes down to the bottom line, the final decision, when it comes to matters of life and death, you trust in God. Enough said!

Our terminally ill participant survived the program, without difficulties visible to those with her. She went immediately to the hospital and care of her doctors on our return. A year later, I heard she was facilitating groups of the terminally ill at a church in a midwestern city.