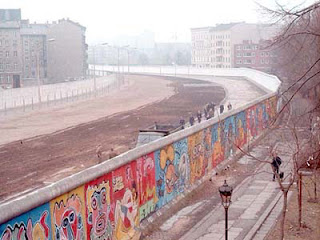 Twenty years ago, on November 9, 1989, the Berlin Wall opened up. Thousands of exhilarated East Germans streamed through to celebrate with Germans on the west side.

If you are old enough, you may remember that day, but many people still do not know about the events leading up to the fall of the East German's wall and their government.

Six people in Leipzig had started a prayer group in 1982. For years a faithful group met every Monday after work in St.Nicholas (Lutheran) Church to pray for peace and then stand outside, each with a candle, for one hour.

In 1989 more people discovered the Monday peace prayers and came to pray and hold candles.

The state security police and the ruling Communist officials took notice. In May they blocked the roads leading to the church on Mondays. But the congregation grew. People were arrested but insisted on non-violence. Still more people gathered.

In September when people exited the church, thousands joined them in the square, everyone holding a candle, a symbol of non-violence. You need to hold a candle with both hands to keep it from going out, which makes it impossible to throw stones. 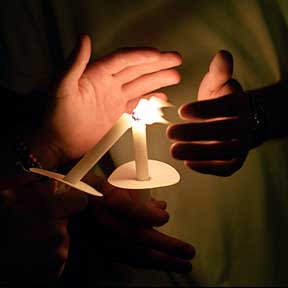 On October 7, there were hundreds of arrests. The newspaper announced that on Monday, October 9, "the counter-revolution" would be put down with "whatever means necessary." There were fears that the same brutality would be used as in Tiananmen Square only 4 months earlier.

Monday, October 9, the government sent Communist party members to fill the church pews, but the pastor shrewdly reserved the balconies for the peace demonstrators. The prayers concluded, statements supporting non-violence were read, the bishop gave a blessing, and the people went out. Those coming out of the church were amazed. The 10,000 people of the previous week had not been scared away. Now there were 70,000 people with candles.

Historian Rainer Eckert tells what happened: "The authorities had threatened to use force to break up the protests. But that never happened. The guns remained silent … The security forces found themselves in the situation where they weren't standing against German imperialism or fascism but against their own families and colleagues and children…. The order to fire never came."

Pastor Christian Führer of St.Nicholas Church said recently: "We were afraid …, but we had the courage of our convictions.... It still moves me today to recall that in a secular country, the masses condensed the Beatitudes in the Lord's Sermon on the Mount into two words: No violence!"

German foreign minister Hans Dietrich Genscher said, "On this day it became clear that peace is stronger than anything else."

The next Monday, October 16, 120,000 people filled the streets of Leipzig. There was no violence -- no looting, no stone throwing, no killing. On October 18th, head of state Erich Honnecker resigned.

In other East German cities also, people began meeting on Monday nights at their city squares, including over half a million in East Berlin on November 4.

By November 7 the entire government resigned. On November 9, the Berlin Wall opened up. 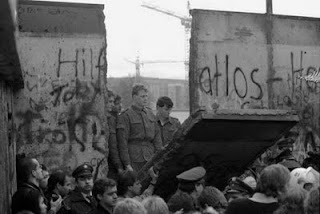 A leader of the East German Communist Party said afterward, "We had planned everything, we were prepared for everything, but not for candles and prayers."

has photo from inside the church
http://germanhistorydocs.ghi-dc.org/sub_image.cfm?image_id=3050