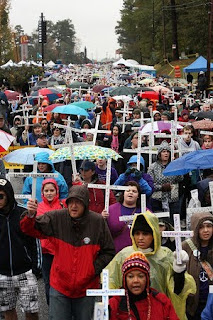 Last week some of us gathered here in Brookings to be in spirit with folks at the School of the Americas Watch demonstration at Fort Benning, Georgia. We watched a film about the mission of this training center called "Hidden in Plain Sight," shared in a litany, and had some conversation about what has been called the "School for Assassins." Perhaps to counter the SOA acronym, the school was renamed in 2001, "Western Hemisphere Institute for Security Cooperation." Many are convinced its mission continues to be the same, new name or not.

Different points of view were expressed in the film. Spokespersons for the school extolled its purpose and downplayed the dictators, human rights violators and thugs trained there. They claimed the torture manual was no longer in use and the curriculum included courses on human rights. SOA Watch had a very different perspective.

It reminded me of an experience I had in early 1980. I was in Mexico with a group studying Liberation Theology. One evening, in a break from the program, we visited in the home of one of our hosts. They had the television on and we were watching some news reels of the insurrection in Nicaragua against the dictator Somoza. What particularly caught my attention was the way the picture was moving from side to side and bouncing up and down. What we were looking at was a scene of Somoza's tanks pursuing Nicaraguans through the streets of Managua. The crowd was running and the person with the camera was running with them. It was obviously difficult to run and keep the camera steady at the same time.

When I got back to the states, I saw some similar footage on TV. The difference was, the camera was steady. The cameraman was capturing a chaotic scene of people running for their lives through the streets of Managua. His hand was steady, as his point of view originated with Somoza's tanks.

This experience has helped me understand why those of us in the U.S. are so often ill informed or misinformed. So much depends on ones' point of view. Especially in a world where those who have the gold, rule (and control sources of information), people tend to get the point of view of the rulers. It is seldom we are able to see the world through the eyes of the poor. When we do, we too, may have to run for our lives.

One of the last notes left by Gandhi in 1948 has become known as Gandhi's Talisman. It describes his conviction about point of view.

"I will give you a talisman. Whenever you are in doubt, or when the self becomes too much with you, apply the following test. Recall the face of the poorest and the weakest (person) whom you may have seen, and ask yourself, if the step you contemplate is going to be of any use to him. Will he gain anything by it? Will it restore him to a control over his own life and destiny? In other words, will it lead to swaraj [freedom] for the hungry and spiritually starving millions?
Then you will find your doubts and your self melt away."