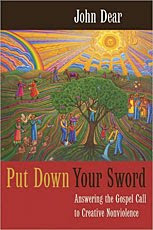 In the video "The Narrow Path," John Dear, SJ, speaks about the "nonviolent Jesus." As he reads the Bible, especially the Sermon on the Mount in the Gospel of Matthew, it is clear to him; Jesus is calling people to a way of nonviolence. It's what New Testament scholar Walter Wink calls "Jesus' Third Way." What both men are saying is, we have an alternative to fight or flight. In a situation of conflict we have more than two choices, fighting or fleeing. We can choose a third alternative, nonviolent resistance, limited only by our imagination and creativity.

Some years ago I was attending a two day meeting in a city away from home. We had motel rooms booked for the overnight and I was sharing a room. My roommate dropped off to a sound sleep almost as soon as his head hit the pillow. I, on the other hand, was distracted and disturbed by the noise from the room directly over my head. There would be a few minutes of quiet, then loud outbursts, and I would hear what sounded like people jumping off the bed onto the floor.

This began at 11:00 PM and was still going strong at 1:00 AM. After midnight, I began considering my options. I could flee from any confrontation and do my best to ignore or tolerate the noise. After all, I had managed with sleepless nights before. Besides, they couldn't go on like this all night, could they? Then again, I could start throwing my shoes at the ceiling; or I could call the management or the cops; or maybe I could go kick in the door and make them stop.

Finally, at 1 AM, I decided. I left my room. I walked outside and up an outdoor staircase to get to the room. When I got there, I knocked lightly on the door. A young man opened it. I could see several other young people scattered around the room behind him. The young man smiled, perhaps because I didn't have any clothes on except my boxers and the snow was falling lightly behind me.

I said, "Is there a kangaroo in here?" He smiled again. He said, "I guess we're being kind of noisy." I shook my head yes and left. A few minutes later I heard several cars leave the parking lot and the ceiling was still.

As best I understand it, this is Jesus' Third Way. You don't run away from conflict but you don't enter it with violence either. You do your best to find an alternative where you are able to present your need in an assertive but non threatening way.

Actually, I started this blog thinking about the ritual of Christian baptism. I had a baptism recently. There was one line in the ritual where parents promise to "encourage the child to renounce the powers of evil and receive the freedom of new life in Christ." What if we just changed that slightly to "the freedom of new life in the nonviolent Jesus." What if we encouraged parents to think about shielding their children from the principalities and powers of violence even as infants. What if we enabled them to teach their little ones alternatives to violence. 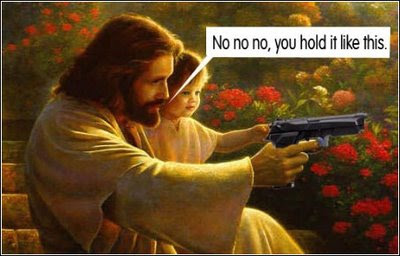 I'm waiting and hoping and working, for a faith community that takes the third way of Jesus seriously; that invites parents to teach their children nonviolence as a tenet of the tradition and an essential moral principle. Come nonviolent Jesus, come!