Gaza & These Righteous Ones

Near the end of the Torah portion that is called Noah, after its central character, beyond the raging waters of the flood, nations begin to branch out. At first they are the direct children of Noah, survivors of the cataclysm, and then the generations of the children of Noah. The generations unfold, and from these the groups of nations branched out, each to its own land and dialect. As the nations branch out beyond the flood, through Ham, second son of Noah, the border of the Canaanites extended even until Gaza. Soon, we all come to be the children of Noah, all who hold to a universal moral standard that the rabbis called the Seven Laws of the Children of Noah. These laws set a standard by which to judge righteousness.

Righteousness can be measured by the nature of one’s behaving in regard to others; not by whether one is a Jew, a Muslim, a Christian, nor by any of the ways and tongues by which people call out to God.

We are told in the beginning of the Torah portion that Noah was a righteous and upright man in his generations. The rabbis debate; was he righteous only in relation to the violent ways of his own generation, or was he truly righteous in regard to all generations? How shall we judge him? How shall we judge ourselves? Noah was a righteous man, but whether for lack of moral insight or creativity he was not righteous enough to avert disaster. Whether he should have drawn the question out of others, made it part of the moral debate, the people of his time were too blind to see the ark and to ask why.

And now, a flood of fire consumes the righteous along with the wicked. I encountered two people during the week in which we read the Torah portion of Noah, each one righteous beyond their generations, each one through words and deeds building an ark of truth, hoping that we will be brave enough to look and to see it before it is too late. 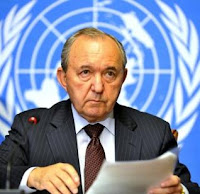 I was privileged to participate in a rabbinic conference call with Judge Richard Goldstone, sponsored by “Taanit Tzedek-Jewish Fast for Gaza.” As lead investigator for the report that bears his name, Judge Goldstone accepted the United Nations Human Rights Council appointment only on condition that he would be empowered to investigate the possibility of war crimes committed by Hamas as well as by Israel during the Gaza war. A life long Zionist, a trustee of Hebrew University in Jerusalem, president emeritus of World ORT, a deeply committed Jew and lover of Israel, Judge Goldstone has been vilified as a traitor. His pain and sorrow were palpable. Would that he could shield his family from the hate and vitriol. A passionate defender of human rights, he played a key role in the dismantling of apartheid in his native South Africa. He was the chief prosecutor for the international criminal tribunals on Yugoslavia and Rwanda. Humbly minimizing his own Jewish knowledge and standing, he quietly explained why he agreed to investigate the Gaza war: “I really felt to live with myself and my own conscience I couldn’t justify having been involved in the investigations in many other countries, and because I was Jewish refuse to use the same norms and principles in relation to Israel.” It is painful to look at one’s own culpability in the suffering of others, even more so when one’s own grievances beg to be acknowledged. Judge Goldstone wanted to interview Israelis and get a fuller picture from within Israel, but he was refused entry. Only when we can open our eyes to a larger picture than our own is there any hope of averting the flood.

Later in the same week of the Torah portion Noah, we were gathered in a local synagogue, with another talk to rabbis. How my heart breaks for the anguish of Dr. Izzeldeen Abuelaish. A physician, a healer of people and peoples, holding each patient close, Israeli or Palestinaian, Dr. Abuelaish is from Gaza, born and raised in the Jabalia refugee camp. An obstetrician/gynecologist for whom every life is precious, “the happiest moment in my life,” he said, “is to hold a baby.” Living in Gaza, working in Soroka hospital in Beersheva, Israel, he is a bridge of hope. “We know each other through one eye,” he said, “the eye we want to see from; Palestinians as terrorists, Israelis as occupiers.”

I thought about the ark we cannot see for moral blindness, the inability to see reality as experienced by others, the prophetic warnings we cannot hear. This righteous man, a believing Muslim, explained that one should take apart the Ka’ba in Mecca stone by stone before taking an innocent life. Then the room became so still. We were embarrassed before his moistening eyes and his soft, steady voice. A story that chilled hearts throughout the world at the time, it was his house that was shelled by an Israeli tank on January 16th, one day before the cease-fire. Would that he could have shielded his family. Three of his daughters and a niece were killed, another daughter severely wounded. His words came without bitterness, “Israel said militants were in the house; yes, my daughters were militants armed with love.” We were overwhelmed by the depth of his faith and his own love, his towering moral presence; “At that moment, what can I do,” he said, “I can go one of two ways, close off, have nightmares, or turn to the light. My daughters won’t come back, but my other children, others, need me.” How much we needed him in that moment, to hear his voice, not to be left alone with images of horror that we had not known but through him.

Judge Goldstone described the horror he felt amidst the destruction that is Gaza. He continues to hope that Israel and Hamas will conduct their own investigations, somehow coming to acknowledge and affirm the lives that were lost, making moot the recommendation to prosecute. If we could only begin with ourselves, talking with each other across the political divide, stepping back from the precipice of refusal and denial, only to look and examine, and to cry.

Dr. Abuelaish carries the destruction of Gaza with him. He transcends the horror with a message of hope, with a challenge for Israelis and Palestinians, for all of us, “words and understanding are stronger than bullets.” Finding his greatest joy in bringing life into the world, the lives of his daughters who were taken from this world inspire him on the path of healing. Channeling his grief by affirming life, he honors his daughters through a foundation that will promote education, health, and leadership for women and girls throughout Gaza and the Middle East.

Of these righteous ones, you can witness a heartbreakingly beautiful tribute to his daughters by Dr. Abuelaish at this website: www.daughtersforlife.com; and hear Judge Goldstone’s talk to the rabbis at this website: www.fastforgaza.net/sites/default/files/audio/goldstone.mp3.