I’ve been thinking about the story of Isaac and his inability to see well when he bestowed the patriarchal blessing on Jacob rather than upon Esau, his first born son. (Genesis 27). The chapter begins with “When Isaac was old and his eyes were too dim to see…” Something many of us can relate to as the years keep piling on! I came across a midrash by Rashi ( medieval teacher of Judaism 1040-1105 CE) that connects Isaac’s blindness with the event in his childhood when his father, Abraham, took him to the mountain to sacrifice him according to God’s command: “Isaac’s eyes became dimmed from seeing” [– a literal translation of the Hebrew me-or’ot]: from the impact of that vision. For when Abraham bound his son on the altar, the ministering angels cried, as it is written,”Hark, the Arielites cry aloud. [Isaiah 33:7]. And their tears dropped into his eyes, and were imprinted into his eyes. And when he became old, his eyes became dimmed from seeing.”

Aviva Zornberg in The Beginnings of Desire-Reflections on Genesis says that the midrash suggests that Isaac’s blindness is a delayed reaction to the unspeakable trauma of his near death at his father’s hands. 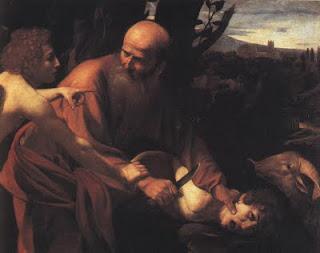 The notion of delayed response to trauma has become all too familiar as young women and men return from Iraq and Afghanistan to resume the normalcy of their lives only to find that they are forever changed by the violence they have witnessed or that they have been called upon to perpetrate. The response is not new. It has been called “shell shock” and “battle fatigue” and now “Post Traumatic Stress Disorder.” I wonder how many more polite euphemisms we can come up with before we finally eliminate the causes of the delayed reaction to the trauma of violence we humans inflict on one another in the name of peace and security.

I also wonder if we humans have witnessed so much violence (military, domestic, social, political, moral, financial, sexual, racial, and gender violence – to name a few) that we, in turn, are in danger of becoming blind, both metaphorically and literally, as we experience a collective form of Post Traumatic Stress Disorder.

In the Isaac story, the blindness manifested long after the original trauma and, indeed, it set in motion another cycle of enmity and discord between Jacob and Esau. As deliberations continue about how to respond to the demands for more troops in Afghanistan, how to respond to the escalating need for a more equitable and effective health care system, how to respond to the human needs for housing, food, well being and dignity, I wonder…have we witnessed so much trauma that our eyes are already dimmed from seeing?

Isaac’s eyes were imprinted by the tears of ministering angels. Those tears, perhaps, permitted him to get through the trauma and live into old age. But the eventual cost to him and his progeny was blindness. Perhaps, in order to offset our collective blindness, we need to be shedding our own tears, finding the ways to insert nonviolent responses to life where we have witnessed violence. If tears can dim our vision, perhaps they can also serve to cleanse and clarify it, allowing us to see humanity for the precious gift that it is, allowing us to respond to life not from the imprisonment of the pain and blindness of trauma but from the liberating pain of a broken and contrite heart.

Vicki Hanjian
(Sacrifice of Isaac by Caravaggio)
Posted by Carl Kline at 12:10 PM