A Low Profile Is Not a Bad Thing 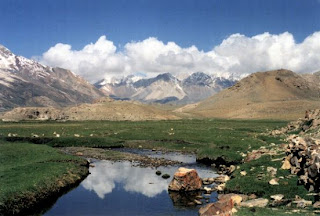 “The counterinsurgency strategy the U.S. is employing in Afghanistan may be the template for war for the next generation. But critics say it overreaches—and could lead to a succession of mini-Vietnams.” So reads the lead to a feature article titled “The future of war” in the October 2, 2009 issue of The Christian Science Monitor. I side with the critics.

Thirty-five years ago this August, I arrived as a Foreign Service Officer with my young family in Islamabad, Pakistan. I spent the next 18 months there working as an agricultural economist for the U.S. Agency for International Development (USAID), the economic development arm of the State Department. This experience has been much on my mind recently as the U.S. searches for sensible policies in Afghanistan and next-door neighbor Pakistan.

The Obama administration correctly sees the Afghanistan and Pakistan internal conflicts as intricately intertwined, and State Department veteran Richard Holbrooke has been assigned to coordinate and direct civilian policies as Special Representative. The New Yorker’s September 28, 2009 issue has an excellent article by George Packer on Holbrooke’s current efforts in this role.

So-called counterinsurgency strategies, like the earlier pacification programs in then South Vietnam, call for combining local economic development efforts with military security on the ground. The theory sounds good. But it requires a massive military presence to provide sufficient security for the economic development activities to be carried out. And it requires a long-term commitment. Is the U.S. really prepared to have large numbers of troops in Afghanistan for many years to come? I don’t think so. The ‘volunteer’ army is greatly overstretched, and the multiple tours of duty in Iraq and Afghanistan are placing impossible strains on troops and their families. Unless the broader U.S. public is willing to share the burden and pain through a draft—which seems highly unlikely—I do not see how a long a long-term counterinsurgency campaign is feasible.

My USAID stint in Pakistan, in 1974-76, occurred during a period of relative (for Pakistan) political stability. Pakistan was recovering from the civil war that resulted in East Pakistan splitting off into the new political entity of Bangladesh a few years earlier, and an elected civilian government was in place. Zulfiqar Ali Bhutto, the father of Benazir Bhutto (who was assassinated in December 2007), was president. USAID and the World Bank had major economic assistance programs in Pakistan at that time, many of them focused on agricultural development. At the time, it appeared that some success was being achieved through these efforts. But even then, in ‘peacetime’, foreign assistance efforts were severely constrained.

Pakistan was then, and remains now, a basically ‘feudal’ country in the rural areas. The Bhuttos themselves came from a large landlord family in Sindh Province. Democratic institutions at the local level were largely absent. There was, and continues to be, a very low adult literacy rate—55 percent at present. Such constraints made it extremely difficult for outsiders to design and carry out programs that might transform the lives of people at the bottom rungs of the economic ladder. My reading of noted Pakistani journalist Ahmed Rashid’s 2008 book, Descent into Chaos: The United States and the Failure of Nation Building in Pakistan, Afghanistan, and Central Asia, leads me to believe that amazingly little progress has been made during the last three decades in transforming Pakistan from a feudal to a modern democratic society.

Many would view with considerable cynicism Pervez Musharraf’s recent statement to an audience at Augustana College that one of his accomplishments in Pakistan was introducing “an essence of Democracy” (Argus Leader, October 3, 2009). Musharraf was the latest in a series of military dictators who have periodically overthrown civilian governments during Pakistan’s chaotic political history since receiving independence (along with India) from the United Kingdom in 1947; he led Pakistan from 2001 to 2008.

If carrying out economic development in Pakistan is difficult, imagine what it must be like in Afghanistan, where national and local institutions are even less developed and the security situation is far worse than in most of Pakistan. The U.S. government is now attempting to recruit agricultural experts to serve in Afghanistan, but I think it highly unlikely that there will be many qualified American applicants for those positions, given the extreme risks experts would face in the country.

Although there are no doubt many crying needs for agricultural and other economic development assistance in Afghanistan, underlying any potential strategy is the issue of poppy production. The U.S. and its NATO allies reportedly have backed off from many of the efforts to destroy poppy fields and otherwise try to directly halt poppy production in Afghanistan. Those policies surely created tremendous resentment on the part of smallholder farmers. Instead, U.S. and NATO poppy control policies are concentrating on opium drug dealers instead of crop eradication, according to The New Yorker article by George Packer. 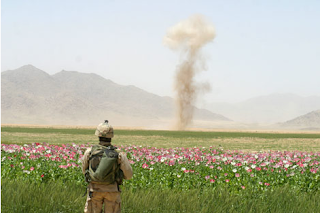 Packer mentions a recent visit of Richard Hollbrooke with the Provincial Governor of Helmand, a major poppy production region of Afghanistan. Hollbrooke and the Governor discussed “whether the price of this year’s wheat harvest would be high enough to dissuade farmers from planting poppies”. It is difficult to know the larger context of that conversation, but I hope that Hollbrooke and his associates are not operating under an illusion that wheat prices are ever likely to be sustained at levels high enough to provide much incentive for peasant farmers to voluntarily switch from poppies to wheat. The difference in profits per unit of land is enormous, and will remain so as long as the demand for opium remains strong.

At least as far back as my time in Pakistan during the 1970s, the U.S. had programs that attempted to wean farmers in the North West Frontier Province and Tribal Areas from poppy production. But these programs had little effect. Poppy production was simply too profitable. (I have a photo in my files, taken on a weekend drive, of my wife walking in a poppy field not far from Islamabad, with farm laborers openly harvesting poppy resin in the same field.) Authorities may temporarily shut down poppy production in a particular region if military and police efforts are harsh enough, but production usually will just move around to some other region in Afghanistan, Pakistan, or other nearby countries.

During the presidential election campaign, Barack Obama began to advocate incursions from Afghanistan into the mountainous border regions of Pakistan, to pursue al-Qaeda and Taliban fighters who take sanctuary there. I was baffled at the time, wondering if Obama had any real comprehension of the terrain of eastern Afghanistan and the frontier regions of Pakistan. I have seen some of that terrain on the Pakistan side. It would be insane, in my view, to commit American troops in those rugged and remote regions of Pakistan. Pilotless drones are being used for such incursions, but that kind of high-tech weaponry requires good ground verification, something that is often lacking—with sometimes tragic consequences for innocent civilians. Moreover, many Pakistanis view the use of drones on their territory as an unwarranted foreign military intrusion, just as would we if the Mexican government were to use drones to target drug kingpins in Arizona.

Current events in Pakistan and Afghanistan have a back to the future feel for me. This leads me to the following recommendations concerning U.S. policy options for this part of the world.

One, recognize our limits. It is difficult to transform whole societies. That is true in peacetime, but even truer when there is major violent conflict underway. I do not believe the U.S. and our NATO allies can impose military solutions in Afghanistan or the borderlands of Pakistan, even military solutions carried out in a counterinsurgency context.

Two, continue to offer economic and other institution building assistance to Afghanistan and Pakistan to the extent the assistance can be effectively utilized and if the poor and powerless are helped, not harmed, by such assistance. For all the positive things U.S. assistance may have accomplished in decades of economic assistance to Pakistan—increased cereal crop productivity, for example—almost nothing has been accomplished in terms of creating a more democratic, just, and egalitarian society. Many millions of people in Pakistan remain desperately poor, powerless, and without a fair and reliable justice system. The more closely associated the U.S. is with governments that perpetuate unjust systems in their countries, the more the U.S. is tainted. We ultimately face a backlash.

In 1977, a year after I left the USAID offices in Islamabad, the civilian government of Zulfiqar Ali Bhutto was overthrown in a military coup. Bhutto himself was later imprisoned and executed by the military government of General Zia ul-Haq. The U.S. Embassy in Islamabad was burned by a student mob in 1979. These events caused me to more fully comprehend why the USAID Mission Director in Islamabad during the time I was there lent the front portion of the quite fine building that USAID owned to several United Nations agencies. The United Nations identification was on the front of the building and the front gate, not USAID identification. United Nations employees had the big, glass-front offices facing the boulevard, while we USAID employees were in cramped offices in the back part of the building. But the USAID Director’s rationale was that although U.S./Pakistan relations were good at the time (mid-1970s), you never knew when political events could turn, and the U.S. might be vilified and threatened by mob action. If and when that time came, he wanted the USAID offices to have a very low profile. How right he was! It was the U.S. Embassy building, very conspicuous a mile or so away, that the mob burned, not the USAID building. Sometimes a low profile is not such a bad thing.

This blog was adapted from an October 10, 2009 column in The Dakota Day, titled “Back to the future in Pakistan, and implications for U.S. policies in Afghanistan” by Thomas Dobbs, Professor Emeritus of Economics at South Dakota State University. Tom is our guest blogger this week.
Posted by Carl Kline at 9:46 AM