The Cake of Custom 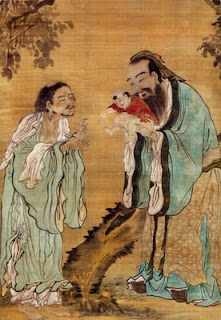 In my World Religions class we've been studying Confucianism. Confucius came into the world at a time of turmoil and disintegration in China. There was full scale tribal warfare and massacres of the innocent. There was nothing that was holding the society together. Missing was what Houston Smith calls the "cake of custom." For Smith, these are the values and traditions one learns in a society, the glue that keeps a given society from coming apart.

As always, this dimension of Chinese history gives my class an opportunity to talk about the "cake of custom" in the U.S. In the year 2009, what is it that holds this society together? My students are generally pessimistic about our "cake of custom" and this class was no exception. Most of my students are parents and when they think about where their children learn values and traditions, the only place they can name is in the home. For them, parents generally stand alone. The school, the church, the government, the media, business ... all seem to be encouraging self interest, a "go it alone" mentality, and an amorality that hardly encourages shared purpose and meaning. My students also lamented the difficulty of learning values and traditions through the extended family, as finding time and covering enormous distances make trips to grandmothers house more and more exceptional. For my students, many elements of the society seem more intent on tearing us apart than on holding us together.

Faced with turmoil and chaos in China, Confucius went about the process of creating what he called "deliberate tradition." What values and attitudes from the past deserved to be reclaimed? What traditions could be successfully integrated once again into Chinese society? Once these questions were answered, Confucius and others set out to integrate these ideas and values into the very fabric of China, through the games children played, the history they studied in school, the heroes held up as models to be followed. In every conceivable way, the values and traditions chosen were integrated into daily life so people learned them as if by osmosis.

I'd like to reclaim a value from our past. It hasn't been totally lost in rural America. The population is so small you still have to depend on your neighbors. The value I want to be deliberate about is neighborliness. If New Orleans had been organized by neighborhoods, maybe people wouldn't have been left without transportation in the face of natural disaster. If we still lived in neighborhoods, we might have more community gardens and mom and pop groceries instead of big box stores that monopolize the food industry. If we resurrected neighborhoods, we might have reasonable size schools where our children didn't drown or disappear. If we organized our neighborhoods, Habitat for Humanity groups might spring up all over the country and barn raisings continue.

Our neighborhood is organized. We've fought city hall twice and won both times. We've had a history of pot luck dinners in the street, to welcome new neighbors and visit with the old. It means I suggest to my 90 year old neighbor that she get off her roof and I will clean out the gutter for her. It means we tell each other when we're leaving for a few days, knowing that if something needs doing, a neighbor will do it.

The Exodus was organized by neighborhoods. Gandhi preached decentralization. Schumacher wrote Small Is Beautiful. We need a society that is human size again and living as neighbors in neighborhood organization can help us do it. Let's be deliberate and resurrect this "cake of custom."
Posted by Carl Kline at 4:02 PM