When Peace Led the Way 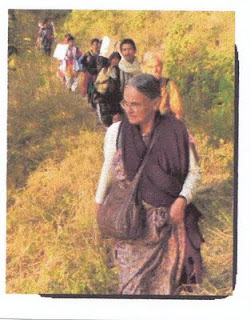 Our story is set in Assam, which, over the last two decades, has
witnessed tremendous unrest, bloodshed, loss of lives and
destruction of property. People know only fear, and uncertainty. They
are never sure, when they leave their homes, whether they will ever
return alive, or not... Our story is about the brave women workers,
belonging to an organization, known as Kasturba Gandhi National
Memorial Trust, of which I happened to be the Secretary, at that time.
These courageous women had been conducting padyatras (foot
march) through all those areas which were infested by violence and
regarded as trouble prone. Bodo, ULFA and other terror groups were active in this area. As they walked
through these areas, they made it a point to talk to the local people, especially to the young, who were the
most likely recruits of different terrorist groups. These groups would often force their way into people’s homes,
and would demand food, and just live there, whether the people wanted them to, or not. The terrified villagers
were too scared to say “NO”, and just gave in to their demands, for fear of a bloody reprisal. In a way, they
were coerced into supporting them, against their wishes. The main problem was that there was no unity
amongst the villagers themselves---another reason why they were easy victims of terrorists.

It was obvious that the task the women activists had taken on themselves, was not an easy one. Their first
priority was to give the villagers a lesson on the importance of unity. This would give them the courage to resist
any opponent. In meetings with groups, big and small, they would stress this. These activists would visit
people’s homes and talk to the families; they would talk to people sitting in small groups, in little shops in the
wayside villages—wherever the people had gathered. They would try to infuse in the villagers the courage to
say “No” if the terrorists tried to force their way into homes. They advised the villagers to go to their neighbours
to seek help, rather than give in. If they were together, the terrorists would find it difficult to threaten them.
I would like to tell you about one particular incident, set in Padampur village of Lakhimpur district, in North
Assam, where a Peace Centre of the Kasturba Trust was functioning. Earlier all the centres of the trust in
Assam were known as Seva (service) kendras but realizing that the work of Peace was of prime importance in
this area, the nomenclature was changed to Peace Centres.

The Centre workers had been going around 12 villages in the area, persuading the people not to buckle down
to terror, but face it boldly. They should not be cowed down by violence and bloodshed. The women workers
gave a call for a Peace rally or a “Rally against Violence” in which women from all the 12 villages had agreed
to join. One of these workers, Kunj Baruah, who was also the Chief worker of this centre, was busy preparing
for this rally. Other sisters were helping to prepare placards and banners. The rally was to start at 10 am.
Suddenly, a little boy came running and informed the worker, “Baidev” (sister), someone is calling you. She
asked him who it was, and as the little boy took his name she recognized him at once, as he used to attend the
balwadi run by the Centre, when he was small. She replied that she would take a little time and would come
after finishing her work. But the boy came back and said, “He is calling you now. Please come immediately”.
So, she followed the little boy. He led her to a dark room, where she found the young man, dressed in “filmy”
style, wearing dark glasses, along with another young man. Both were sitting on two chairs, they had an
“attitude” about them. Placed before them was a table, on which various kinds of guns and pistols were laid
out. She realized at once that this was a terrorist outfit.

“Why do you want to take out a Rally against Violence?” he asked. “I want you to stop it at once. I believe in
violence, and work for it!” he added
“It is not my decision alone…..the women of 12 villages around have decided to take out the rally. I have no
right to stop it….” she replied.”And I do not want to stop it because I believe in nonviolence,” she countered
him.
“Do you realize what the consequences could be?” he said threateningly. Immediately, another young man
stepped out of the shadows, picked up two guns, and placed them on her two shoulders, on either side of her
head. However she did not lose faith or courage.”Kill me if you wish, but I will not stop the rally.” Her voice was
firm, but had love and compassion in it.
The young man who had called her said, “I have no wish to kill you…but at least you can take our message to
the village women and tell them that we do not want you to go ahead with the rally against our wishes...”
She replied calmly,” I work for peace and nonviolence. This is a peace rally, and I will not stop it simply
because you tell me to…….but I can certainly take your message to the village women, and tell them that you
do not wish that we go ahead, and then see what they have to say. I know they would not stop the rally.”

The women started the rally at the scheduled time, carrying placards and banners with messages of peace, of
nonviolence. It was a spectacular sight…..all women, walking in silence, peacefully, through the streets. There
were no speeches. The rally ended with Sarva Dharma Prarthana (all religions prayer). No one dared to
obstruct or prevent it from passing. There were no disruptions of any kind.

Later, one evening, the young man along with one or two others came to see her and said, “baidev,(sister) we
really admire your courage and strength. Despite all our threats, you stuck to your decision.”
Again she replied calmly, “Ours is the power of Nonviolence; yours is the power of violence. If you will follow the
path of nonviolence, you too will gain the strength and courage that we have, my friend!”

Kunj Baruah was asked by her seniors in the Trust to leave the centre in the village, and the area in general,
as there was a danger to her life. But she decided to stay on and continue her work of helping and serving the
people while spreading the message of nonviolence and peace, side by side. She continued to persuade the
young people, especially young boys, not to join or help the terrorists. It was a slow process, but it worked.
Gradually, the area became more and more peaceful and the young men of the area also changed their minds
and activities because they were impressed by the power of nonviolence.