Shabbat and the Mosque - Letting Go of Conflict 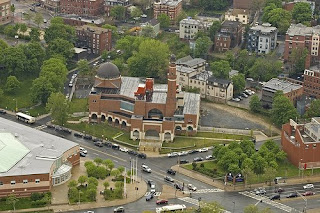 On Friday, the week of the Torah portion called Korach, the new mosque and cultural center at Roxbury Crossing in Boston was dedicated. I attended the interfaith breakfast that celebrated the event. It was a deeply moving gathering, with speakers representing a wide spectrum of the interfaith community of Boston, as well as videotaped words of welcome from Governor Patrick. A thread of hope ran through all of the talks, including those of two Jewish speakers. Expressed repeatedly, it was a hope that this grand and breath-taking edifice would be a place of interfaith gathering, a place for communities to come to know each other and to acquire new understanding. There was a palpable sense of pride and achievement among those of the Muslim community, graciously welcoming and expressing appreciation to those who were clearly not Muslim. During informal mingling, a man of regal bearing in turban and robes approached me, acknowledging my yarmulke, extending his hand in friendship. A person of great humility, he was the chief architect of the mosque. He spoke of the building’s many arches, meant to embrace all who entered, to be inscribed with words from great voices of the spirit, including from among the Prophets of Israel.

Amidst this celebration of hope, with official greetings coming from many corners, extending words of welcome to the religious landscape of Boston, there was a glaring absence. There was not a single representative, nor a greeting conveyed, from the official leadership of Jewish Boston, not from any of the organizations that presume to represent us. It was an absence that filled me with sadness amidst the quiet joy of that place and time. There has been hurt and there have been legitimate concerns. The work to be done has been acknowledged, and a hand extended toward its doing. As a community officially constituted, it is time to extend our own hand and to receive that of the other. Beyond the absence of those who should have been there, a gathering of demonstrators formed outside, making its views known through placards and leaflets. Condemning the mosque as extremist, the demonstrators are of those who cannot let go of the controversy that many of them fomented in recent years, straining relations between the Jewish and Muslim communities.

The inability to let go of conflict, to be willing to approach and to be approached by the other, is one of the sad dynamics in the reading of Korach (Numbers 16-18), the Torah portion that framed the week of the mosque’s dedication. Korach, a leader in his own right, mounts a rebellion against the leadership of Moses and Aaron. From the first words of the portion, va’yikach Korach/and Korach took, the rebellion is seen as an attempt by Korach to wrest more power for himself, not as a revolt on behalf of the people or for a higher cause. Seeking to defuse the tension, Moses calls on Korach and his compatriots to come and talk. Of their refusal, the Rabbis teach: from here we learn that people should not hold fast to conflict/ayn machzikin bamachloket. The great commentator Rashi expands on this, saying of that moment: Moses was going around after them to conciliate them with words of peace.

Of Korach’s revolt, the Zohar, mystical interpretation of the Torah, describes its nature as plugta d’shalom/a contention against peace. Rabbi Yitzchok Meir of Gur comments further, p’lig al Shabbos d’Shabbos hu shalom/it is a contention against Shabbos, for Shabbos is peace. Whether among individuals and families, communities, peoples and nations, it is difficult to let go of conflict and controversy that has simmered. It is difficult to recognize new realities and transcend old fears and perceptions. In the spirit of Shabbos, on whose eve the dedication of the mosque took place, itself the Muslim Sabbath, it is time for the Jewish community to let go of the conflict and to embrace a new beginning.

In an effort to maintain dignity and to convey the hope of reconciliation, a young Muslim leader called on people not to engage in shouting or debate with the demonstrators as they left the breakfast for the dedication ceremony. In a profoundly moving gesture, he then asked people to come and take one long-stemmed white rose, about fifty of which seemed to have been at the ready, in anticipation of the demonstration. All of those who took a rose were asked to offer it to one of the demonstrators or to quietly place it on the ground in front of them. Holding a rose in my hands, almost tearful, I approached one of the organizers of the demonstration. Though his words to me did not suggest any readiness to relinquish conflict, his arms were enfolded around an ever-burgeoning bouquet of white roses. I placed my rose upon the others and wished him Shabbat shalom.