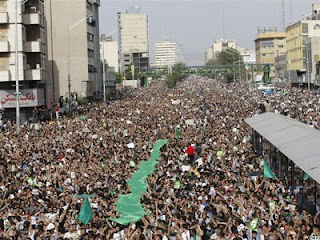 Last week I was watching the McNeil/Lehrer report on television. I usually expect there to be a bit more depth and insight into the news of the day on public television. But one piece of the evening's reporting really disappointed and disturbed me.

Jim Lehrer was interviewing Karim Sadjadpour and Trita Parsi on the return to the streets of protesters in Tehran. Both men had inside sources assuring them that the dust had not settled; that it was important to keep the eyes of the world focused on Iran; that the repression of the government and bravery of the resisters was far greater than was widely known; that because of the governmental violence, tactics other than street demonstrations might be developed

To this latter notion, Jim Lehrer replied, "What other tactics are there?" Maybe the incredulous way he asked the question was to represent many in his audience. Nevertheless, I was dumbfounded! It was one of those occasions when I wanted to shout at the television. I wanted to place a copy of "The Methods of Nonviolent Action" by Gene Sharp in front of Lehrer, pointing to the two hundred different tactics one might use for nonviolent social change. Still, in 2009, a respected journalist on perhaps the most respected news show in the U.S., seems unaware of the theory and practice of nonviolent social change.

We are perhaps NOT witnessing the most profound experiment in nonviolence of our time, because major media are primarily oriented toward stories of violence and ignorant of the stories of nonviolence.

I'm drawn to the calls at night from the rooftops in Iran of Allahu Akbar, God Is Great. How can any reasonable person, especially in a religious society, deny someone the right to proclaim God's greatness from the rooftops of their own homes. And yet, the proclamation has been given a symbolic political content that cannot be ignored. This is nonviolent strategy at its best. One of the interviewees on the Lehrer report mentioned that these calls were happening in a neighborhood where Revolutionary Guard members lived, the most feared members of the Iranian military. There was some suggestion that they might even be participating. In nonviolent change, one shouldn't take loyalties for granted. Repression and violence can puncture even the hardest hearts.

I'm recalling that when Chileans were protesting the Pinochet dictatorship, they called for a National Protest Day. Few people went out. Buses vanished. Office workers went home early. Everything slowed down, until evening, when the whole city came to life with the beating of pots and pans, honking of horns, and a general explosion of joy and excitement. It was a turning point after ten years of military dictatorship. A massive popular movement was born that was the first step back to historic Chilean democracy. We can anticipate a similar future story for Iran.

Doing nothing, doing little, doing something slowly, are all wonderful tactics in a campaign for nonviolent social change. There are lots more. They are only limited by human imagination and creativity.